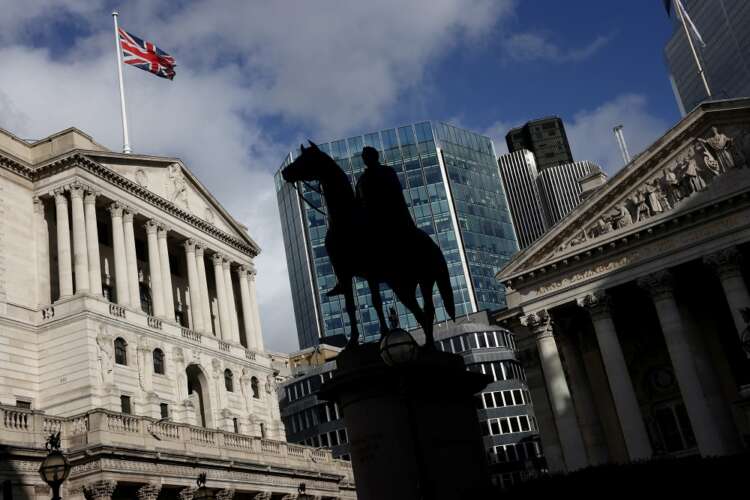 BRISTOL, England (Reuters) -Bank of England chief economist Huw Pill said the weight of evidence was shifting towards a rise in interest rates next month but that he had not made a decision, and markets would do better to focus on the longer term.

Speaking to reporters at an economics conference in Bristol, Pill also cautioned against the widespread assumption that the BoE’s first policy move would be to raise interest rates by 15 basis points to 0.25%, as he was open to other options.

The BoE wrong-footed many investors this month when it did not lift interest rates from their record low 0.1%, following comments from Governor Andrew Bailey in late October which markets interpreted as a signal that a rate rise was very near.

Since then, inflation has risen to a 10-year high of 4.2% and jobless data has not pointed towards higher unemployment after the end of the furlough scheme – a key concern that stayed the BoE’s hand at the start of this month.

Further unemployment data will come before the BoE’s next meeting on Dec. 16.

“The burden of proof is perhaps a little bit in the other direction…, so now I’m looking perhaps for reasons not to hike rates,” he said.

Two of the BoE’s policymakers voted to raise rates to 0.25% this month. Asked if it was safe to assume that, whenever it came, this would be the BoE’s first tightening step, Pill said he could not confirm this.

“That reflects a genuine uncertainty at a personal level, that I will want to see how I will assess the situation,” he said, adding that rates could go up by another amount.

While it would be convenient to raise interest rates to a multiple of 0.25%, there was no urgency to do so if a different scale of tightening proved appropriate, he added.

Earlier, Pill said it was a “pretty uncomfortable time” to join the BoE in September when inflation was already well above its 2% target, and set to reach around 5% next year.

“There’s no quick fix, and that lack of a quick fix means some patience will be required,” Pill told the conference hosted by the Economics Observatory, a body to communicate economics research, and the Festival of Economics.

Pill said policy communication was getting more complicated due to two-sided risks to growth and inflation, in contrast to the heavy downside risks during the COVID-19 pandemic.

The BoE wanted to “train” markets to focus more on the medium-term outlook and two-sided risks, said Pill, a former Goldman Sachs economist, but some volatility was unavoidable given uncertainty about the precise timing of rate rises.

“If we can generate the genuine understanding, we can take out unnecessary volatility. But it is also important we don’t try to suppress artificially volatility which reflects the true uncertainties in the economy,” he said, adding that he had “genuine uncertainty” about how to vote in December.