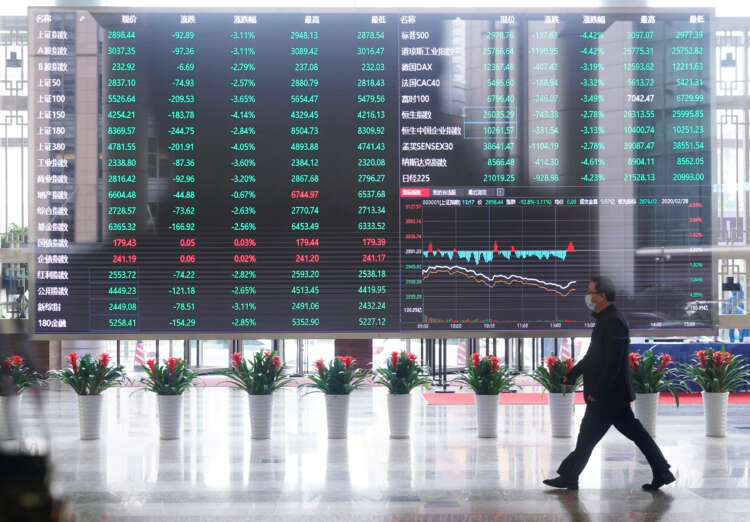 That saw the region lag a solid Wall Street performance overnight, with MSCI’s broadest index of Asia-Pacific shares outside Japan off 0.44% and set for a weekly decline of 1.2%.

But the tone was more subdued in Asia, with the Hong Kong benchmark down sharply 1.5%, dragged down by index heavyweight Alibaba. The Chinese e-commerce firm’s shares tumbled over 10% after its second-quarter results missed expectations due to slowing consumption, increasing competition and a regulatory crackdown.

The decline reflects slowing growth in China this year, analysts said, while a broad months-long regulatory crackdown by Beijing across many sectors including property and technology have weighed on investor sentiment more generally.

Chinese economic data over recent months have also underlined a loss of growth momentum, with the outlook over the next 12 months more subdued than at the start of the year.

“Following substantial slowdown of National Bureau of Statistics retail data for the past two months, it is not surprising to us that (Alibaba) printed a missed quarter,” said Citi analysts in a note, lowering their target price on the stock.

Turmoil in China’s property sector, which is struggling with a heavy debt burden and a squeeze on liquidity amid Beijing’s crackdown, also remain a drag on broad global sentiment.

Chinese blue chips were flat, as was much of the region.

Elsewhere, major currencies were largely quiet with the dollar sitting just below a 16-month high hit against a basket of its peers earlier in the week.

The yen hardly reacted to the government’s stimulus news, and was headed for a small weekly loss, though at 114.27 per dollar it has also recovered since touching an almost five-year low of 114.97 a few days ago.

In emerging markets, a gathering currency crisis in Turkey has driven the lira to a record low after the central bank – facing political pressure – cut rates despite inflation running near 20%.

“The UST market is consolidating within recent ranges is awaiting new catalysts to shift valuations. … there is a lot already in the price and as a result, progress toward higher yields is likely to be slow and defined by momentum shifts and sentiment swings,” said analysts at Westpac in a note.

On Thursday, oil fell to six-week lows after Reuters reported, citing sources, that the Biden administration asked some of the world’s largest oil consuming nations – including China, India and Japan – to consider releasing crude stockpiles in a coordinated effort to lower global energy prices.