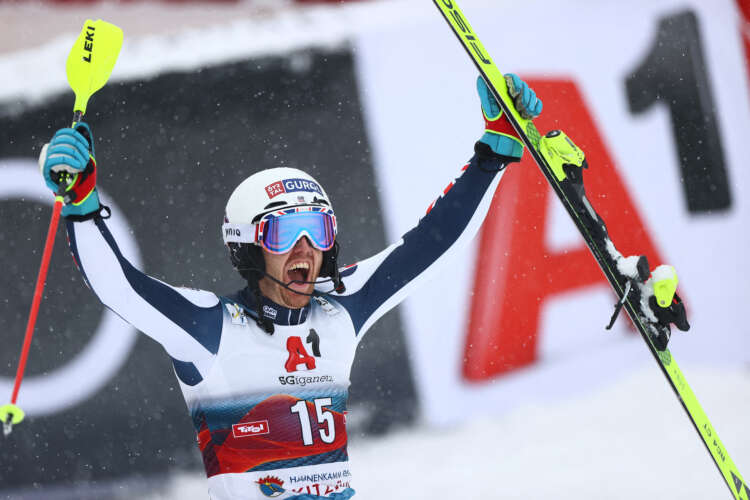 (Reuters) -Dave Ryding won the Kitzbuehel men’s slalom on Saturday in a first for a British skier in the 55-year-history of the Alpine World Cup and with the Beijing Olympics only weeks away.

Norway’s Lucas Braathen and Henrik Kristoffersen were second and third respectively in the most prestigious slalom on the men’s circuit.

Ryding, 35, also became the oldest winner of a men’s World Cup slalom and kissed the snow as he crossed the finish line in the Austrian resort.

“I guess there’s life in the old dog yet,” he told Eurosport television, whose excited commentator told British viewers not to adjust their screens.

“My team never stopped believing, they kept pushing me. More than I would like sometimes. My fiancee always supports me and my family is always there and I’m not the easiest to deal with all of the time. I hope they are popping a prosecco at home.”

Ryding had started 15th and was sixth after the first run down the Ganslern piste but he then put in a tremendous second leg while those starting ahead of him made errors or failed to finish.

Italy’s 2010 Olympic champion Giuliano Razzoli straddled a gate near the finish, Norway’s Sebastian Foss-Solevaag also straddled, France’s Clement Noel was all over the place and Italian Alex Vinatzer skied out.

“I had so much emotion when I finished and now I don’t know what to say,” said Ryding, with a member of his team dropping to the snow and shouting ‘He did it’ over and again.

“I’m normally not lost for words but now I am,” he added before ‘God Save the Queen’ sounded for the first time on an Alpine podium to cheers from the crowd.

“It means the world just to hear some Brits and people cheering,” he said.

“I don’t have a home race but there’s always some Brits in the Alps because we love skiing. We love to party as well.”

The Briton, who started out on a dry ski slope near Pendle in north-west England, will be competing in his fourth and final Olympics after being named by Team GB last Friday and he drew congratulations and praise from across the sport.

“That’s such a special achievement to come from his background skiing on plastic and prove that you can reach the top even if you didn’t grow up in a powerhouse ski racing country. He inspired a ton of little racers today.”

He is now fourth in the World Cup slalom standings, with five different winners — three for the first time — in five races so far and Braathen leading.

(Reporting by Alan Baldwin in London, Editing by Louise Heavens and Ken Ferris and Pritha Sarkar)