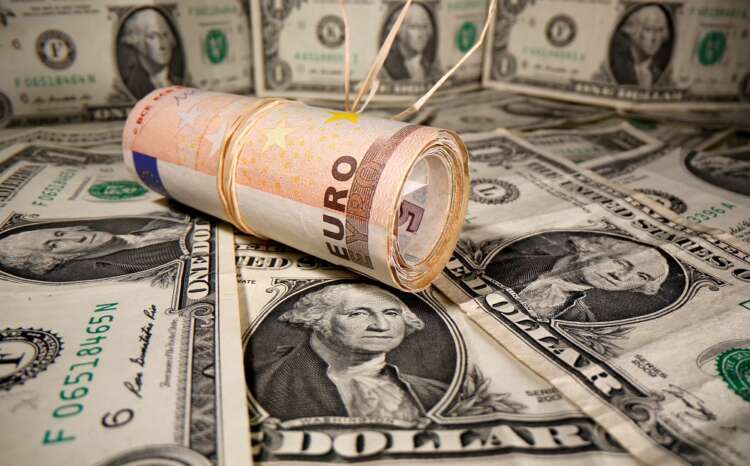 London (Reuters) – The euro neared a 16-month low on Monday as concerns grew over new COVID-19 restrictions in Europe, with Austria entering another full lockdown and Germany considering following suit.

Germany’s acting Chancellor Angela Merkel told leaders of her conservative party that measures being taken to stop the spread of the coronavirus in Europe’s biggest economy were insufficient and that stronger action was needed.

“The EUR/USD outlook feels like one of those rare occasions when everything is aligned against the euro,” Kit Juckes, head of FX strategy at Societe Generale in London, told clients.

“COVID-19 is a bigger problem in Europe than anywhere else,” he said, adding it was not the only factor. The Chinese slowdown and global supply chain issues are hurting Europe more than the U.S., while expectations that the Federal Reserve will raise rates supported the dollar, he said.

New lockdowns and pressure on the service sector in Europe now provide the European Central Bank with many more reasons to go slow on tightening its policy, ING said in a note.

Borrowing costs for U.S. dollars in currency derivatives markets rose to their highest levels in nearly a year.

Three-month cross-currency swaps for euro-dollar fell to their lowest levels since December 2020, according to Refinitiv data, suggesting greater demand for the greenback. [L8N2SD31D]

The dollar got additional support from bullish comments on Friday by Federal Reserve officials Richard Clarida and Christopher Waller, who suggested a faster pace of stimulus tapering may be appropriate amid a quickening recovery and heated inflation.

The dollar index, which gauges the currency against six major peers, traded little changed at 96.131, staying within sight of last week’s 16-month high of 96.266.

A more rapid end to tapering raised the possibility of earlier interest rate increases too.

The minutes of the Federal Open Market Committee’s meeting early this month, when policymakers announced a start to tapering, are due on Wednesday. They may provide more insight on how many Fed officials are considering faster tapering or earlier rate increases.

U.S. President Joe Biden is also likely to announce his nominee for Fed chair this week, after reaching a decision on whether to keep incumbent Jerome Powell or elevate Fed governor Lael Brainard to the post.

‘Get Back’ documentary shows Beatles ‘as you’ve never seen before’