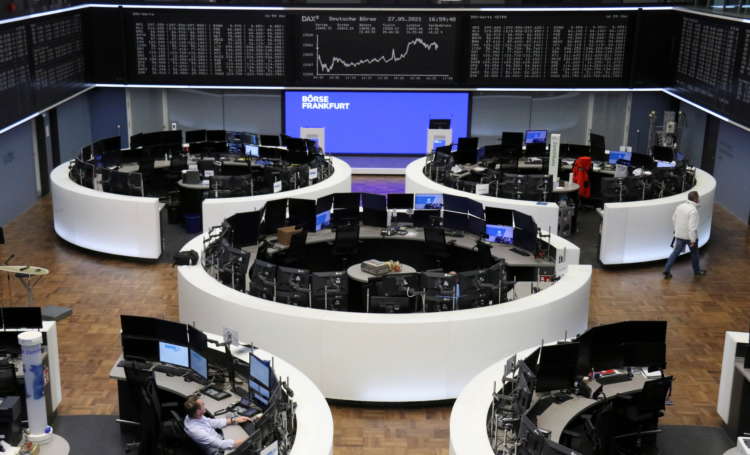 LONDON (Reuters) – Charging stocks markets were on track for a seventh day- and fourth straight month of gains on Friday, as investors bet the United States will lead the world economy out of its COVID-19 slump with a $6 trillion spending boom.

Sell in May and stay away? Not this year folks.

European stocks hit a new record high as they opened in London, Frankfurt and Paris. [.EU] Tokyo had leapt more than 2% overnight and the 50-country MSCI world index was now nearly 90% up from last March’s lows.

U.S. stocks were poised for further gains after reports President Joe Biden will seek $6 trillion in federal spending for the 2022 fiscal year in budget proposals later.

The results of a Reuters poll of around 300 analysts this week showed most see world stocks continuing to rise this year on robust economic and earnings recoveries, although any serious quickening of inflation would temper enthusiasm.

“We will get what we call ‘overheat’,” said Royal London Asset Management’s head of multi asset Trevor Greetham, predicting a “short and fiery” boom in some of the world’s major economies that may well cause a spike in inflation.

There were also significant moves in the currency and commodity markets.

The dollar hit a seven-week peak against the yen as traders braced for what are expected to be some steamy U.S. inflation figures later, while the Chinese yuan extended its hottest monthly streak since November.

Britain’s sterling suffered a minor wobble on talk it might delay a full relaxation of COVID restrictions next month. But it was still on course for its best month against the dollar this year and, at $1.4192, was close to a three month top.

Oil prices, which play a large role in inflation via energy costs, were nudging towards $70. [O/R]

Brent and WTI are both on track to post weekly gains of 5% to 6% as analysts expect global oil demand to rebound closer to 100 million barrels per day in the third quarter on summer travel in Europe and the United States following widespread COVID-19 vaccination programmes.

A separate report confirmed a 6.4% acceleration in the annualised rate of economic growth last quarter, bolstered by massive fiscal stimulus.

Positive signals on the economy helped lift benchmark Treasury yields back above 1.6% overnight and those on Germany’s Bunds, seen as the benchmark in Europe, ticked up to a still negative -0.17% in morning trading.

Bond markets have watched this week as multiple Federal Reserve officials have come out again to calm jitters over the growing evidence of price pressures, though they also signalled a possible start to talks about tapering stimulus.

The Fed’s vice chair for supervision, Randal Quarles, said on Thursday that he was “fully committed” to keeping monetary policy running full-throttle while jobs recover, while laying out the case that “upside” risks to inflation may be mounting.

In an interview with Reuters published on Friday one of the ECB’s top policymakers, Isabel Schnabel, said that while the euro zone economy was hopefully past the worst it still needed support.

“Rising yields are a natural development at a turning point in the recovery – investors become more optimistic, inflation expectations rise and, as a result, nominal yields go up,” Schnabel said. “This is precisely what we would expect and what we want to see.”