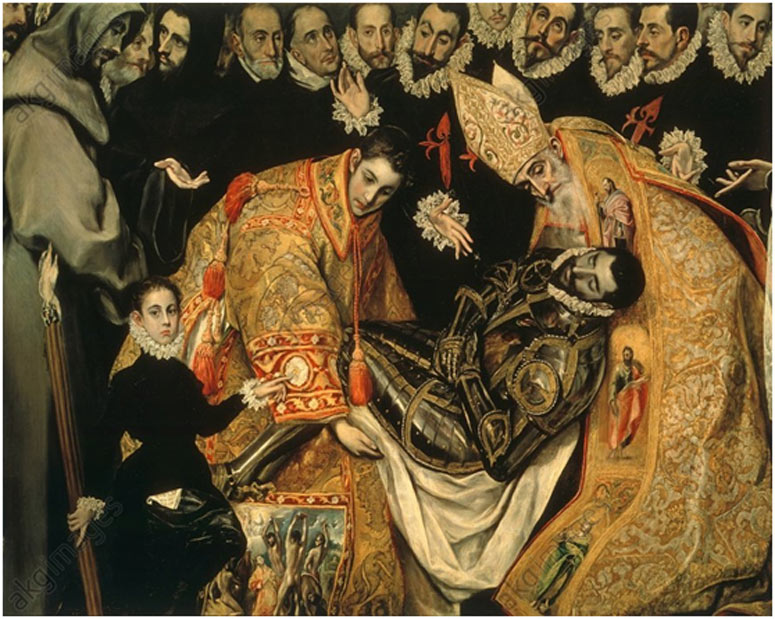 Detail from El Greco’s The Burial of the Count of Orgaz (1586- 88) with saints wearing 16th Century vestments.

An exhibition of fabulous textiles show how the Catholic Church used glamorous rich clothes of breath-taking beauty to awe and impress its congregants – investing in a process of religious propaganda – getting its message out by packaging it in stunning clothing.

Now an important exhibition and sale of 16th to 19th Century textiles including church vestments goes on display at the Indar Pasricha Fine Arts gallery in Pimplico from September 30 to November 3.

Propaganda is a Latin word originated from the Church: in 1622, the Holy See established the Congregatio de Propaganda Fide meaning to propagate the faith or simply Propaganda. Part of that process of propaganda was the creation of garments to generate awe and wonder in congregants. Now a stunning collection of these garments, some 500 years old, will be exhibited and sold by Indar Pasricha Fine Arts in London from September 30 to November 3. 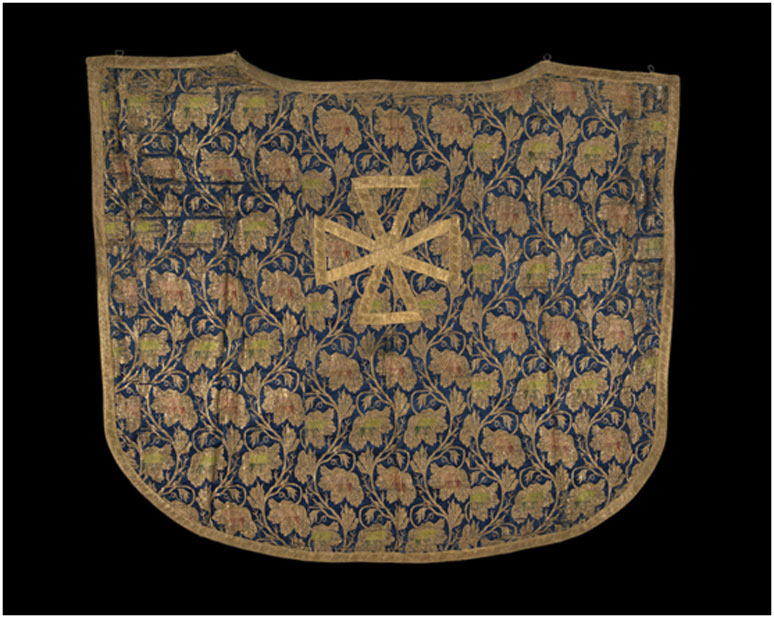 Opulent vestments of the richest silks played a vital role in the ‘sacred theatre’ of the Roman Catholic Church. The grandeur of the church, solemnity of liturgical ritual and ornate vestments of the celebrant of the Mass, offered a glimpse of the glory of heaven on earth. From the Middle Ages, “sacred and secular rulers alike expressed their dynastic claims, military prowess, political aspirations and accomplishments by commissioning, displaying, wearing and offering textiles as gifts.”[1]

An important missive to the Jesuit mission in Ethiopia from St. Ignatius Loyola (ca.1491-1556), founder of the Society of Jesus, emphasized that it would be “ of help to you” to carry the very best vestments and church ornaments for the altar.[2] Vestments clearly functioned as part of the Church’s propaganda to appeal to the faithful and gain converts in the missions.

The symbolic power of vestments to propagate the faith can be traced through the chasuble –one of the principle vestments worn by the priest celebrant of the Eucharistic Mass. In the 4th century AD, the conversion of the Roman Emperor Constantine and official approval of Christianity lead to the adoption of Roman civil attire for ‘sacred clothing’.

The chasuble was adapted from a common article of clothing, the paneula, a simple cape worn as an outer garment. It was transformed during the Middle Ages into an ornate garment of the finest woven and embroidered silks often threaded with gold, silver and jewels. Maureen Miller indicates that reasons for the ‘ornate style’ included the role of the bishop in royal governance as part of his pastoral care leading to “ the association of elite status and political authority with precious attire.”

An embroidered detail of a church vestment

The relationship between garments for the medieval clergy and those made at God’s direction for the first priest contributed to the concept of splendour, “You shall make sacred vestments for the glorious adornment of your brother Aaron … to consecrate him for my priesthood.” (Exodus 28:2-3).

Finally, the potent idea of being ‘vested’ in garments symbolizing clerical virtues that transform the bishop from a man to the ‘Vicar of Christ’ attracting “ the eye and the hearts of the faithful”. Vesting prayers while putting on each garment to create the ‘virtuous celebrant’ became widespread. “Accept the priestly robe through which charity is learned” the bishop prayed as the chasuble is put on. “ The chasuble because it covered and protects all other vestments was long regarded as the symbol of love which crowns other virtues.”

The Council of Trent (ca.1545-65) encouraged the use of sumptuous vestments and church interiors to propagate the beauty of God in the celebration of the Mass, in contrast to the ‘grim austerities’[3] of the Reformation. From the 16th century until the late 17th century, the Church reaffirmed its glory through the opulence of gilt and marble church interiors in the grand baroque and rococo styles. 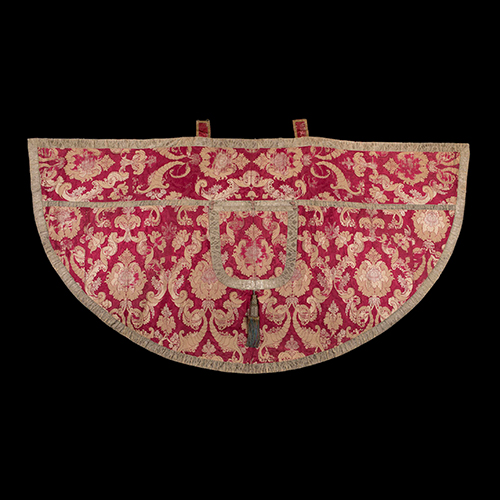 Recognition by the Church of the value of the ‘language of clothes’ in propagating the faith was made clear by the demarcation of sumptuous vestments for use by the priest as celebrant of the Mass and in liturgical processions. These symbols of ecclesiastical status were not for day-to-day functions within or outside the Church where simple clothing was the norm. The visual rhetoric of priestly attire can be seen in the choices of the most recent Popes. Pope Benedict XVI (r.2005-13) continued the liturgical use of gold embroidered vestments and revived wearing of the ermine mozzetta. [4] In contrast, Pope Francis I, who gave himself a new name in “honour of one unembroidered”, has chosen a simple style.