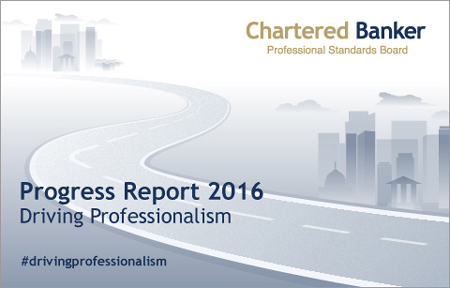 Nearly a quarter of a million bankers, the great majority of them in the UK, have demonstrated their personal commitment to professional competence and conduct by achieving the Foundation Standard for Professional Bankers, according to figures published today by the Chartered Banker: Professional Standards Board (CB:PSB)[1].  This is a strong sign, according to the CB:PSB Chairman, Lady Susan Rice, that professional standards are being enhanced in a collective effort to rebuild confidence and trust in UK banks and bankers.

Since 2011, the CB:PSB[2] has been at the forefront of the drive to build and demonstrate professionalism in banking. It continues to be the only body creating professional standards of conduct and expertise for bankers to achieve individually.

“To have nearly a quarter of a million individual bankers now achieving the Foundation Standard is a tremendous feat and provides the first strong evidence to emerge of changing banker behaviour. At a time when the banking industry is aiming to demonstrate accountability and in turn, restore customer confidence and trust, it’s reassuring that professional standards that go beyond regulatory requirements will play such an important role.

The CB:PSB, now in its fifth year, is successfully delivering its promise to help professionalise banking. Its agenda is also enhancing wider efforts to embed a professional culture in banking; a culture in which customers, colleagues, stakeholders and communities can have confidence, trust and pride.”

“Embedding professionalism at the heart of the banking system is a key driver for cultural change. The Foundation Standard for Professional Bankers is an important initiative led by the industry to promote standards of conduct in banking and it is encouraging that so many individuals have now achieved this. There is still work to do for those working in the banking industry to demonstrate to the public that behaviour has changed and initiatives like the Foundation Standard for Professional Bankers are a key part of achieving this.”

OXFORD ACADEMICS REINFORCE CALLS FOR BANKERS TO BE LICENSED

69% OF CUSTOMERS DEMAND INNOVATION FROM BANKS