Vietnam is said to be a potential market place for retail banking development, with the increasing presence of foreign brands pursuing the goal of expanding their footprint in this somehow 90 million population market. However, the local banks are also striving to emerge substantially in their own ways to maintain the majority market share with their strengths in loyal customer relationship, vast distribution network and aggressive advertising budget. Not only holding the “bigger bite” of the banking cake at home, Vietnamese banks tend to export their initial trade names abroad, which has signaled a significant recognition to the local bankers.

Apart from these exports, the local banks have tremendous attention in improving their banking technology and service quality to meet customers’ diversified banking needs nowadays. More and more local banks gain international recognition with access to banking awards of fame and honour granted by many industry publications and rating bodies. This shows how hard local banks aspire to excel their capacity towards international operation standards to compete in global integration environment.

One of these examples is the Southeast Asia Bank (SeABank), a 100% Vietnamese owned commercial bank, who has been awarded “Most Innovative Retail Bank Vietnam 2012” by the UK-based Global Banking and Finance Review (GBAF). GBAF’s award offered to SeABank in this category has significantly recognized SeABank’s outstanding achievements in its innovative state-of-the-art banking solutions serving in retail banking sector. In order to be awarded Most Innovative Retail Bank Vietnam 2012, SeABank has to meet GBAF’s strict requirements about various aspects of excellence, including brand values, corporate financial efficiency, business development capacity, risk management, operation process, advanced banking technology, retail banking product diversification, market penetration capacity and potential growth resources. GBAF’s banking awards 2012 enlists over 70 banks in the world, including regional well-known banks such as OCBC Singapore, DBS Bank (Hong Kong), Siam Commercial Bank (Thailand), Doha Bank (The Middle East), The National Australia Bank, etc. Mrs Le Thu Thuy, senior management of SeABank, says “We can now pride ourselves to stand in the same line with other foreign bankers. The award is not only a pride for SeABank in particular but also a showcase for the excellence of Vietnam retail banking in international market.” Prior to GBAF award, SeABank had been recognized by many other local and international organizations for its endless endeavour in banking technology and service quality enhancement, including The World Quality Commitment 2011-2012 prizes awarded by Business Initiative Direction (B.I.D); Asean ‘s Most Typical Enterprise 2010; Asean Brand of Fame 2012; High Straight-through Rate For Payment Processing from Wells Fargo, HSBC, Citibank during 2007 – 2012… 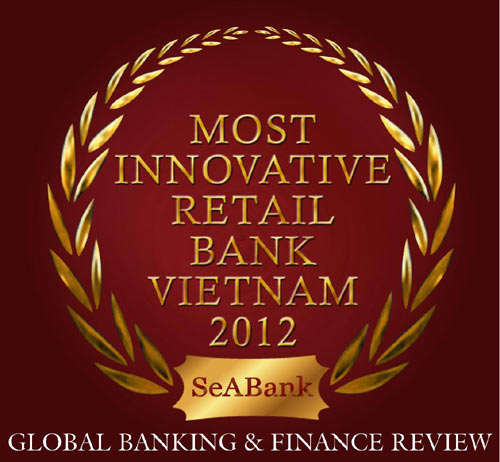 Many other local banks are awarded in different categories by The Asian Banker, Euromoney, The Financial Times, Asia Money, Global Finance, etc., which signals that local banks are on their right track of retail banking strategy and advance to higher level of competitiveness capacity over their foreign counterparts. Since the Eurozone and some other regions are struggling in their financial crisis, Asia, especially Southeast Asia, is far from being affected and more than that, it is maintaining its good shape with more and more local banks being awarded of recognition as a matter of fact. Vietnam can be a good example of the regional banking outlook when local banks are still holding more than 98% of the banking-prone population, leaving their foreign competitors behind in the race.