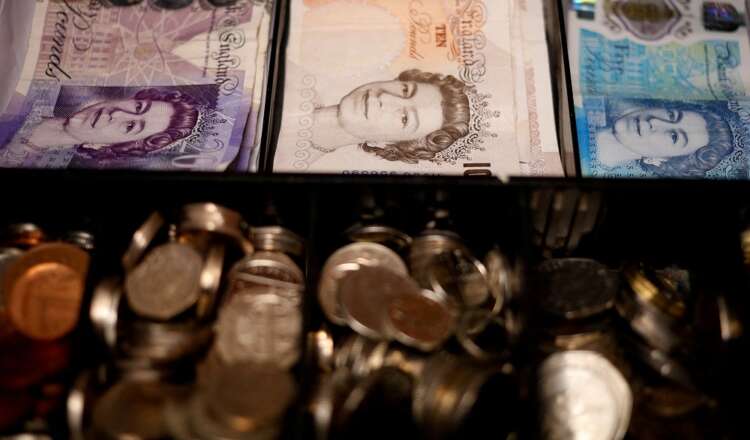 By Alun John and Iain Withers

LONDON (Reuters) – The pound edged up on Monday on news Britain would reverse plans to cut the highest rate of income tax, one contentious part of a package of financial measures that last month sent sterling and British government bonds into meltdown.

Yields on British government bonds fell, pushing their prices up. The government’s “mini-budget” on Sept. 23 had triggered a rout in the bond market, forcing the Bank of England to step in last week. The FTSE 100 was down in line with broader European equities.

Finance minister Kwasi Kwarteng said the decision to scrap the top rate tax cut had been taken with “some humility and contrition”, after his party’s lawmakers reacted with alarm to a move that favoured the rich during an economic downturn.

The U-turn comes after the government’s fiscal plans triggered a crisis of investor confidence, jolting markets to such an extent that the BoE had to intervene with a 65 billion pound ($72.79 billion) bond-buying programme.

Analysts said the move – which reverses 2 billion out of 45 billion pounds of planned tax cuts – would support the pound, but warned more government action might be needed.

“We do not see today’s announcement by the UK chancellor as a game changer for sterling,” said Vasileois Gkionakis, Citi’s head of European FX strategy.

“The borrowing path trajectory will barely change and the big issues at play (unsustainability, higher risk premium) remain in place in our view.”

The pound gained as much as 1% to $1.128 on initial media reports of the U-turn, the currency’s highest level since the day before Kwarteng announced the “growth plan” that cut taxes and regulation, funded by vast government borrowing.

“This probably won’t be enough on its own to restore confidence – whether that’s reversing more tax cuts or plans to reduce spending. Markets will still want their pound of flesh,” said Lee Hardman, currency analyst at MUFG.

Jan von Gerich, chief analyst at Nordea, said it would probably take markets time to “buy the message” but that it was a step in the right direction.

“Questions still remain and sterling will likely remain under pressure,” he added.