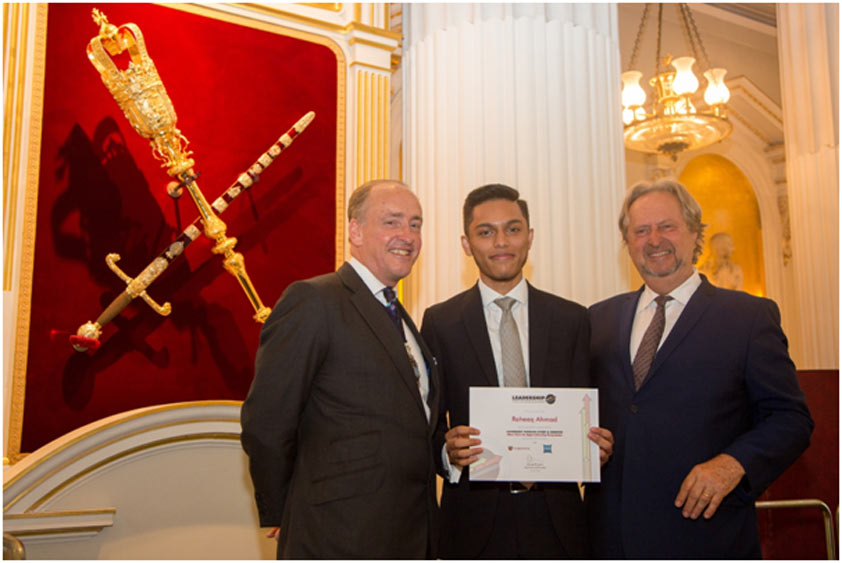 A LEYTON trainee accountant has won an all-expenses paid trip to Paris after being named East London’s Apprentice of the Year by social mobility charity, Leadership Through Sport & Business (LTSB).

Raheeq Ahmad, 20, was presented with the award by the Lord Mayor of London, Charles Bowman, and LTSB Chairman, David Pinchin, in a graduation ceremony held at Mansion House, London also attended by friends and relatives.

The delighted apprentice said: “I hope there is a bright future ahead because It’s a great honour to have won and I’ve been lucky enough to have met some brilliant people on the way.

“I didn’t grow up in an environment where there are many successful people around and so to win this was truly an amazing experience.”

Raheeq says his life was transformed when he was encouraged to join the apprenticeship scheme, Leadership Through Sport & Business (LTSB).

The pioneering programme, which helps young disadvantaged people secure top jobs in business and finance with blue chip companies, helped Raheeq land an apprenticeship after he decided against going to university.

Now having landed a top job at one of the UK’s leading accountancy firms, Grant Thornton, Raheeq wants to encourage other youngsters to follow suit as he feels schools should offer an alternative to university.

He said: “In my opinion,apprenticeships are the way forward because you get experience and knowledge at the same time.

“My parents wanted me to go to university but when they saw me working at West Ham and then Grant Thornton they understood what I was trying to achieve.

“The important thing was that I came out with a lot of work experience instead of university debts of around £27,000 and no guarantee of a job.”

The initiative – supported by the West Ham Foundation – provides an alternative to university by offering a clear career pathway for 16 – 21-year olds interested in a career in finance.

LTSB encourages the development of leadership skills by arranging for apprentices to lead coaching sessions at the West Ham Foundation, which was a personal highlight for Raheeq.

“During my pre-apprenticeship, I was working for West Ham Football club. I coached a lot of kids and that gave me the confidence to get out of my comfort zone.”

At the graduation ceremonytheLord Mayor of London acknowledged the ‘importance of empowering the next generation.’

LTSB Chairman, David Pinchin, praised Raheeq and the rest of the cohort for graduating a programme that transforms “sleepy school leavers to workers ready to hit the ground running.”

Share on FacebookShare on TwitterShare on Linkedin
Related Topics:blue chip companiespioneering programmesocial mobility charity
Up Next