Financial and professional services employment in London up in 2012 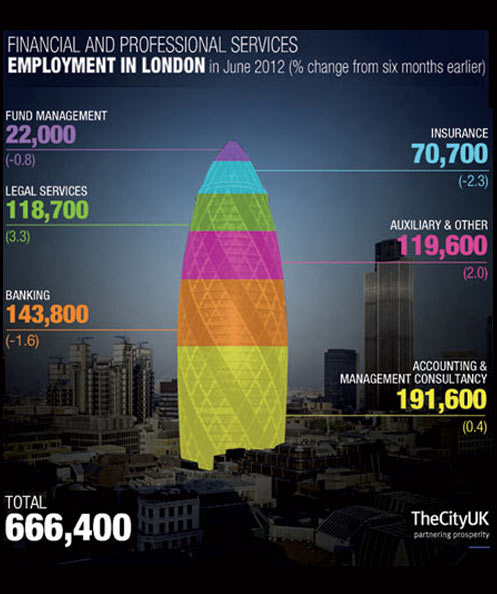 Increase in legal services offsets decreases in insurance and banking

Employment in financial and professional services in London increased by 0.4% in the first six months of 2012 to 666,400, building on the 3.8% growth seen in 2011. The net increase of some 2,700 jobs in the first half of the year was largely due to professional services, including legal services, accounting and management consulting, which together were up by 1.5%. This increase offset a 0.5% decline in financial services jobs. Although companies in survey indicated slower than expected growth for 2012, they reported overall stability in terms of London headcount.

TheCityUK’s findings, from a survey of companies employing over 100,000 staff in London, show that employment in legal services in the capital was up by 3.3% between January and June 2012, the largest increase of any individual sector. The combined total for the management consulting and accounting sectors also increased by 0.4%. Within financial services, the insurance sector experienced the largest decline of 2.3%. The banking and fund management sectors saw more moderate declines of 1.6% and 0.8% respectively. On the other hand, other financial services (consisting of various supporting activities, exchanges, trade associations) increased by 2%.

Trends since the start of the economic slowdown

Financial and professional services jobs in the City of London and Canary Wharf also fell at the outset of the credit crisis, but have recovered more quickly and are up to nearly 315,000 in 2012, from the low point of 276,000 in 2009.

Financial and professional services sectors which have seen the biggest job cuts in London since the start of the economic slowdown include accounting and management consulting (down 13%) and fund management (down 7%). Overall employment in other sectors fared better, with banking seeing a 2.5% increase, insurance 1% and legal services 0.9% growth.

Figures for the country as a whole show that employment across the UK has been slower to recover, with a 6.3% decline in financial and professional services employment since the start of the economic slowdown. Although London is core to the UK’s international position, other cities are also important financial centres, including Edinburgh and Glasgow in Scotland; Birmingham, Bristol, Leeds, Liverpool and Manchester in England; Cardiff in Wales; and Belfast in Northern Ireland. The financial sector currently employs more than 1 million people in the UK, over than two-thirds of whom work outside London. Added together with the nearly 1 million employed in professional services, it is easy to see the importance of a sector that employs 7% of the working population. The financial and professional services sectors together account for nearly 14% of the UK gross value added and underpin the businesses that drive jobs and growth.

Despite concerns about the future competitiveness of London as a global financial centre, it continues to rank strongly in survey evidence and market activity. The robustness of international business undertaken by financial organisations operating in the UK is demonstrated by the financial and professional services trade surplus, estimated at £55bn in 2011, which represents 3% of GDP in its own right. This is larger than the combined surplus of all other net exporting industries in the UK. However, the trading environment for financial services remains challenging, with activity in areas such as IPOs and mergers and acquisitions below high points reached before the financial crisis.

Based on expectations from companies in the survey, TheCityUK is forecasting a 0.5% increase in financial and professional services employment in London for the full year 2012. Companies in the accounting and management consulting sectors are particularly optimistic about employment prospects for the second half of the year. If economic growth is established in the broader London economy, TheCityUK is predicting further recovery in employment during 2013. 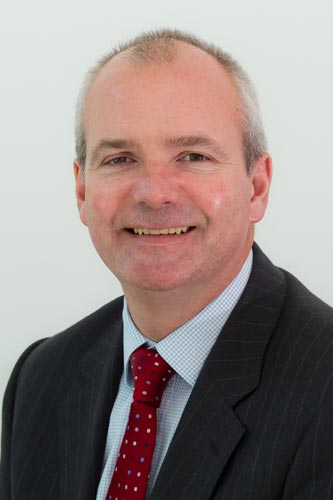 The financial and professional services sector is critical to the UK economy. The job market is still sluggish and London is facing competition from other financial centres, including those in Asia and America. Everything needs to be done to ensure that London remains attractive to talented employees as a place to work, and that firms are able to compete against their peers in the US and Far East. However, our research shows that London is still seen as a great place to live and work.
By Chris Cummings, Chief Executive of TheCityUK
www.thecityuk.com
Share on FacebookShare on TwitterShare on Linkedin
Related Topics:
Up Next