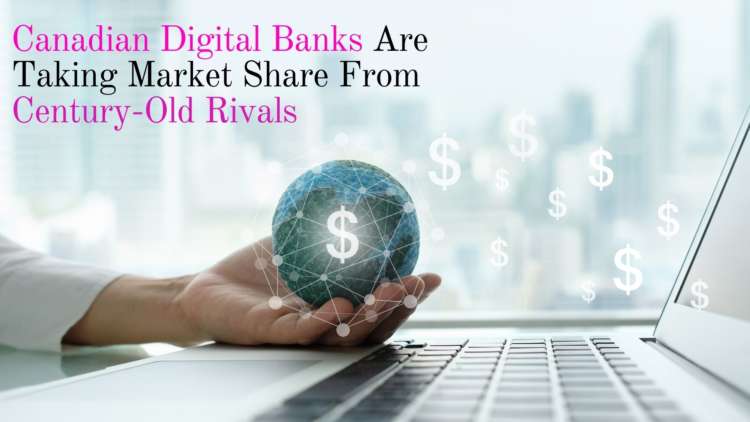 Unbeknownst to many, modern online banks can trace their roots to Canada when Netherlands-based ING Bank tested its digital banking concept in the late 1990s. Coinciding with the very early days of the internet, the technology made it possible for new online banks to gain market share against their century-old rivals.

Fast forward to 2021 and Canada’s top online banks have never been more relevant for the consumer. Online banks offer far superior savings tools and more convenient banking options at a fraction of the cost — if not free.

ING decided in the 1990s that Canada would serve as its first global test market. ING Direct went live in Canada in 1997 and didn’t shy away from taking on the “Big Five” legacy banks. ING marketed itself as the only true alternative to big banks that offer low saving interest rates along with high fees and service charges.

ING Direct exists without branches and operates solely in the digital universe. By eliminating branches, the bank is able to bring its service directly to consumers and pass along some of the savings in the form of superior offerings. Instead, it offers several “cafes” where consumers can speak to a representative to better understand how the digital only bank operates.

ING quickly stole market share from legacy banks as it offered 4% or even 5% on savings products. Until its existence, Canadians hoping for such an attractive and safe return was a pipe dream.

The list of Canadian online banks quickly expanded after ING’s launch. Achieva Financial was established in 1998 as an online-only financial institution. Achieva presented a similar online bank model as ING and offered superior rates versus banks.

Canadian online banks received a boost in the aftermath of the global financial crisis as it represented an opportunity to distance themselves from big banks and to exclaim they were not part of the problem and should be part of the solution.  The Bank of Canada acknowledged as much in a 2013 report that the global recession years prior resulted in a “significant loss of trust by the general public in the financial system.”

Over the years ING attempted to remain relevant in the eyes of consumers by introducing new features. It launched in 2012 a feature that allows consumers to deposit checks into their online bank account through its app.

ING hoped that a complete brand refresh in 2014 including renaming itself as Tangerine would translate to higher customer acquisitions. ING/Tangerine CEO Peter Aceto told Canadian Business at the time:

“Our competitors and us sound more similar [as ING Direct] than they did 10 years ago. In our choosing of our name we wanted it to further differentiate ourselves for our customers and make us again look more like a challenger and to stand out from the rest.”

Other foreign banks attempted to enter the Canadian market but failed to gain any traction. Ally Financial launched an online bank in Canada in 2009 but the Canadian operations were sold to RBC in 2012. As part of the acquisition, RBC decided to terminate Ally’s high-interest online savings bank.

As the year passed since ING’s Canadian launch, several retailers with strong brand recognition in Canada jumped into the online bank sector.

Grocery chain retailer President’s Choice partnered with banking giant Canadian Imperial Bank of Commerce (CIBC) in the late 1990s to offer an online bank. Known as PC Financial, the online bank offered high-interest savings accounts along with lending products and standard banking accounts. PC Financial felt that a unique and differentiating strategy would separate itself from peers like ING to earn top ranks as one of the best online banks.

Instead of operating branches, President’s Choice leveraged its nationwide footprint to offer kiosks and pavilions inside its affiliated stores. This offered consumers the best of both worlds: a pure online banking experience but with the convenience of hundreds of pavilions across grocery stores.

However, the online bank failed to survive the test of time. In 2017 all consumer banking products were terminated and savings products transitioned to CIBC’s direct banking unit Simplii Financial.

Canadian Tire, an automotive, hardware, sports, leisure, and housewares retailer jumped into the online digital bank space in 2003. The retailer’s ambitions to become one of the top Canadian online banks was met with enthusiasm as it offered superior returns on saving accounts compared to traditional banks. A Canadian Tire-branded credit card provided additional savings to consumers through reward points on everyday purchases.

The financial arm of Canadian Tire survived the test of time and still attracts its fair share of loyal customers. The iconic Canadian brand earned the status as the most reputable company in commerce and this certainly bodes well for its financial services arm.

Conclusion: So, Who Are The Best Canadian Online Banks In 2021?

The majority of review sites and experts crown EQ Bank as one of the top online banks — if not the best online bank. EQ provides a savings account with an interest rate of 1.5% that is far superior to its peers.

Compared to Royal Bank, it might seem that the Canadian online bank offers an inferior rate. RBC’s website advertises a savings account that offers a 2% return — but only for 90 days. Afterward, the rate drops to a mere 0.05%.

Tangerine also ranks as one of the best online banks but its savings rate is far inferior compared to EQ Bank. But Tangerine offers a full suite of banking products, including checking accounts, credit cards, and mortgages compared to EQ Bank that only offers savings accounts.

Motive Financial and Simplii Financial are included near the top in most reviews of the top online banks. Motive stands out as one of the best online banks as it offers interest on chequing accounts but Simplii is mostly attractive to existing CIBC customers.

Bottom line, consumers have greater access to online banks and it has never been easier to open digital bank accounts. The best part is consumers don’t have to part ways with their traditional bank if they still value the convenience factor but still want to take advantage of compelling online bank products and services.

This is a Contributed Article