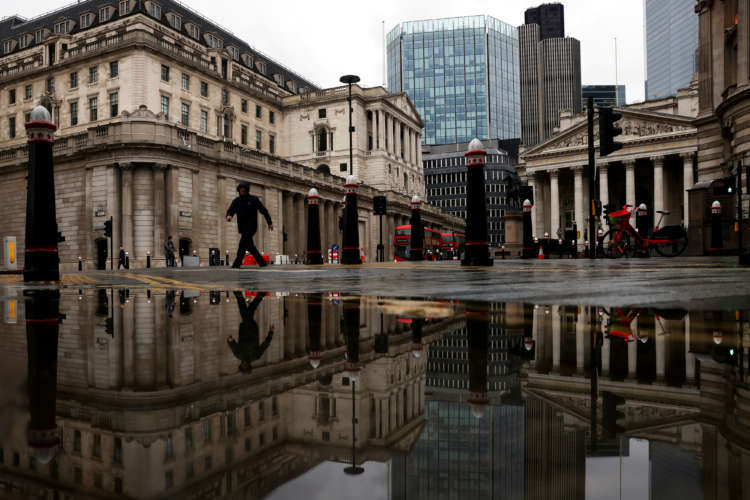 LONDON (Reuters) -Reviewing the cap on banker bonuses is not a priority for the Bank of England as it decides whether to keep rules inherited from the European Union, a senior BoE official said on Monday.

The EU rules limit bonuses to no more than twice a banker’s fixed pay, and were introduced following taxpayer bailouts of banks in the 2008 global financial crisis.

Most of the European bankers hit by the rule work in London.

The BoE at the time objected, saying the rule could lead to banks ramping up fixed pay to get round the cap, saying there were other ways of curbing excessive payouts, such as deferring a portion of the bonus over a long period.

Leaving the EU’s full orbit last December means that Britain can ditch or change the rule.

“In the post-Brexit agenda at the moment we have other issues that we are prioritising,” Victoria Saporta, executive director of the BoE’s Prudential Regulation Authority, told parliament’s Treasury Select Committee.

Saporta said the BoE’s original arguments against the cap stood.

Regulators want financial regulation to be nimbler and simpler as banks call for action to mitigate the loss of business from the City of London to the EU since Brexit.

But first Britain needs to legislate to convert more than 40 inherited EU financial laws into a form for regulators to be allowed to craft more flexible rules, a process that could take years.

Saporta said this process was necessary to allow the BoE to simplify rules for smaller banks, and to make insurance capital rules more “fit for purpose”, as demanded by lawmakers.

Regulators are also under pressure to push through other changes, including reforms of listing rules and fintech to bolster the City’s attractiveness.

“In terms of prioritisation, we have limited bandwidth and we will try and do the things that we think make the most difference because they need to be done quickly, and therefore everything has to fight for its place in the queue,” Edwin Schooling Latter, the Financial Conduct Authority’s director of markets, said.

Dollar near multi-week lows before Fed, yen unmoved after BOJ