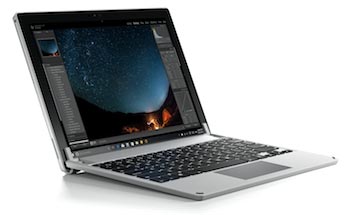 Brydge, the company that set a new benchmark for iPad keyboards, today unveiled its first keyboard for the Microsoft Surface – the Brydge 12.3. Brydge is bringing its sleek design, high-quality construction and innovative functionality to Microsoft Surface users. The Brydge 12.3 has already been named a CES 2017 Innovation Awards Honoree. It will be on display at CES 2017 at booth #7933 in the North Hall of the LVCC.

Unlike any other keyboard on the market, the Brydge 12.3 transforms Surface into the ultimate laptop. It is the only keyboard for the Microsoft Surface Pro that removes the dependency of a kickstand and allows the user to have a full laptop-like experience. Marketed as the perfect laptop/tablet hybrid, the Brydge 12.3 brings a 100 percent aluminum body with a full backlit keyboard, 180º screen rotation and an adaptive trackpad to the Microsoft Surface. The surface customer now has a compelling option with more functionality than the entry-level model at a better price than the Surface Book. Brydge also plans to release a model with integrated storage in 2017.

“Surface users have been waiting for a powerful keyboard like the Brydge 12.3. Since its release in 2012, the Surface has been the fastest-growing tablet and this growth is only accelerating. It is a powerful and versatile device that deserves a keyboard that unlocks its true potential. With the addition of the Brydge 12.3, we feel the Surface customer has greater options between the entry level Type 4 keyboard right up to the full laptop hybrid – the Surface Book,” said Nicholas Smith, CEO of Brydge. “The combination of the Brydge 12.3 and Surface creates a game-changing package which transforms the Surface into a true laptop-replacement and the ultimate in mobile computing for Windows users.”

Starting at £149.99 MSRP, the Brydge 12.3 launches for preorder on 5th January at a special preorder price, with a spring 2017 delivery, at www.brydgekeyboards.com.

Brydge will release details of its retail partners who will stock the Brydge 12.3 in the coming months.

HOW CAN CFOS STOP THE EXODUS OF YOUNG TALENT?

THE CITY OF LONDON CORPORATION APPOINTS SPECIAL ADVISER FOR ASIA