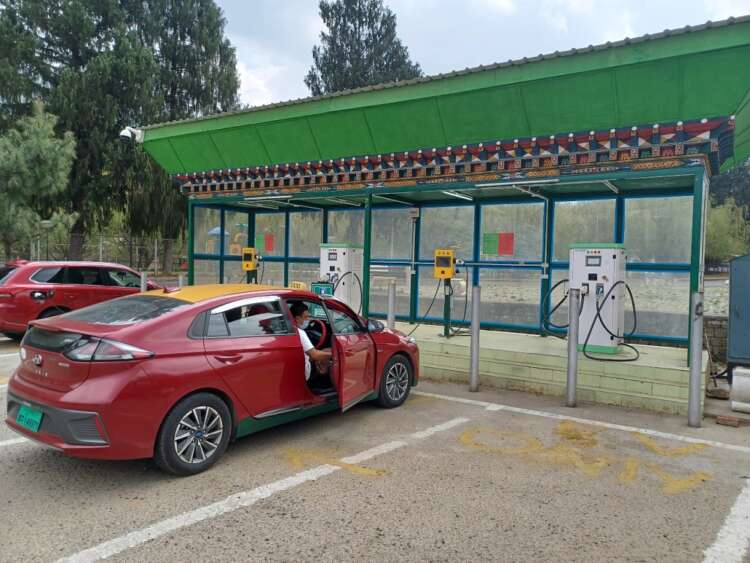 THIMPHU (Thomson Reuters Foundation) – As night sets in, Dorji Wangchuk plugs his electric car into a charging station, then starts thumbing his rosary and mumbling prayers while he waits the half hour before he can continue driving his taxi around Bhutan’s capital, Thimphu.

He swapped his petrol taxi for an electric vehicle (EV) last year through a project that aims to put 300 battery-powered cabs on the road by September as part of the tiny Himalayan kingdom’s commitment to keep down its already low carbon emissions.

After seven months of driving his new taxi, which he bought helped by a subsidy and a collateral-free bank loan, Wangchuk, 47, said he is already seeing the benefits, especially as Russia’s war in Ukraine has sent fuel prices soaring.

“Driving an EV is much better. I don’t have to worry about changing gears and the car is comfortable too,” he told the Thomson Reuters Foundation. “I am even getting good reviews from my passengers.”

After a bumpy start in 2019, with COVID-19 lockdowns delaying car imports from countries like China, Japan and India, Bhutan’s electric taxi rollout is finally kicking into gear, said Sonam Tobgye, who manages the $3-million project.

Including the 129 electric taxis that have so far been bought through the programme – a figure that has risen seven-fold since last November – there are about 260 electric cars either on order or already being driven around Bhutan, he said.

That makes up only about 0.2% of all vehicles in the country.

But Tobgye said the idea is to start small and gradually build up orders until the government reaches its goal of having electric cars make up 70% of all new car sales by 2035.

“The 300 taxis will be the ambassadors,” he said. “We expect them to showcase (the electric cars) and build a level of confidence and trust in EVs. Then we expect the rest to follow.”

This is not Bhutan’s first attempt to get its citizens to ditch their gas guzzlers.

A fledgling electric vehicle programme https://news.trust.org/item/20150609095115-nxulh stalled soon after its 2014 launch due to a combination of high purchase costs, limited charging and servicing infrastructure, and low public trust in the technology.

Some industry experts and consumers warn those same challenges could once again slam the brakes on Bhutan’s electric dreams.

HOW LOW CAN YOUR CARBON GO?

With about three-quarters of its land mass covered in trees and strong political will to limit planet-warming emissions, Bhutan already absorbs more carbon each year than it produces, making it one of the world’s few “carbon-negative” countries https://news.trust.org/item/20211103163336-kgu4r.

The electric-taxi initiative is one of a raft of measures the government is taking to meet its pledge to ensure its emissions stay at net zero https://news.trust.org/item/20200921201510-2m3lp for all time.

Eligible applicants get 20% of the cost of their new cab as a direct cash subsidy, along with a low-interest loan from the Bank of Bhutan for 70% of the purchase price, leaving the owner only 10% to pay upfront.

According to estimates by the organisers, the project could cut greenhouse gas emissions by 43,000 tonnes over nine years, the average lifespan of a fuel-run taxi.

“Studies have shown that the EV taxis are very sustainable,” he said. “By replacing only 300 fossil fuel-based taxis with EVs, the impacts will be minimal. However, this is a very good start.”

With most of Bhutan’s electricity generated by hydropower, considered a clean energy source, government data shows transport is the highest contributor to the country’s carbon emissions.

Cars, trucks and other vehicles are responsible for more than 45% of the energy-related greenhouse gases Bhutan produces, according to the information ministry.

While electric cars save money in the long run, taxi drivers say most Bhutanese are still put off by how much they cost to buy.

Outside of the taxi pilot project, the price of conventional cars ranges from 600,000 to 800,000 ngultrum, while the electric versions cost three times as much.

“Because the whole EV thing is new in Bhutan, it has people worried,” said project manager Tobgye, adding that the government is running awareness campaigns to bust misconceptions about electric cars and promote their benefits.

The project is also tackling another concern that is holding back orders: Bhutan’s limited charging infrastructure https://news.trust.org/item/20211125174011-yd4tl.

When the project launched, there were only five charging stations in two districts, Thimphu and Paro. Since then, the government has added another 28 across seven districts, with more on the way.

Private electric car dealers looking to meet their corporate social responsibility targets have also been placing charging points around the country, he added.

For now, all charging stations are free to use. Whether they stay that way “depends on the uptake of the EVs”, said Tobgye, noting that if the market grows fast, EV users will likely have to start paying for the power they use.

When Tshering Tashi bought his electric taxi through the project last year, he was motivated by the savings.

But the dearth of charging stations has him worried he may have made the switch too soon, before Bhutan was fully prepared for an electric car revolution.

“The charging stations available today are enough for the number of EVs that are on the road, but we don’t know what the situation will be if there are more EVs later on,” he said.

“We may lose customers to other taxis while we wait in line to charge our cars.”

(Reporting by Namkhai Norbu; editing by Jumana Farouky and Megan Rowling. Please credit the Thomson Reuters Foundation, the charitable arm of Thomson Reuters, that covers the lives of people around the world who struggle to live freely or fairly. Visit http://news.trust.org)