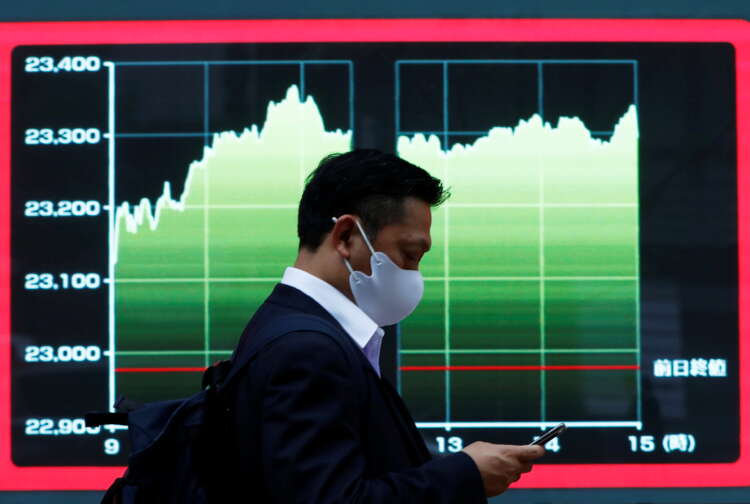 TOKYO (Reuters) – Asian shares advanced and U.S. long-dated bond yields edged up to a five-month high on Wednesday on rising optimism about the global economy and corporate earnings while the yen slipped to a four-year low on the dollar.

In New York, the benchmark S&P 500 index gained 0.74% to finish just 0.4% below its early September record close while the CBOE market volatility index fell 0.6 point after earlier hitting 15.57, its lowest level since mid-August.

“Tech shares and other high-growth shares that would have been sold on rising bond yields are rallying, which clearly shows that there is now strong optimism on upcoming earnings,” Fujito said.

Earning reports will be in full swings in many countries over coming weeks. Dutch chip-making machine maker ASML Holdings and Tesla are among those that will release results later on Wednesday.

The positive mood saw U.S. bond yields rising further, with the 10-year U.S. Treasuries yield climbing to 1.662%, a high last seen in May.

Shorter yields dipped, however, with the two-year yield slipping to 0.404% from Monday’s peak of 0.448% as traders took profits for now from bets that the U.S. Federal Reserve will turn hawkish at its upcoming policy meeting in early November.

Investors expect the Fed to announce tapering of its bond buying and money markets futures are pricing in one rate hike later next year.

“The Fed is likely to become more hawkish, probably tweaking its language on its assessment that inflation will be transient. While the Fed will maintain tapering is not linked to a future rate hike, the market will likely try to price in rate hikes and flatten the yield curve,” said Naokazu Koshimizu, senior strategist at Nomura Securities.

In the currency market, rising U.S. yields helped to boost the U.S. dollar to a four-year high against the yen at 114.585 per dollar.

In addition to U.S. yields, the yen was dented by expectations of a wider trade deficit in Japan due to rising oil prices and on views the Bank of Japan will stick to loose monetary policy even as other central banks move to tighten their policies.

In cryptocurrencies, bitcoin stood at $64,068, near its all-time peak of $64,895 as the first U.S. bitcoin futures-based exchange-traded fund began trading on Tuesday.

Oil prices eased slightly in Asia but held near multi-year peaks as an energy supply crunch persisted across the globe.