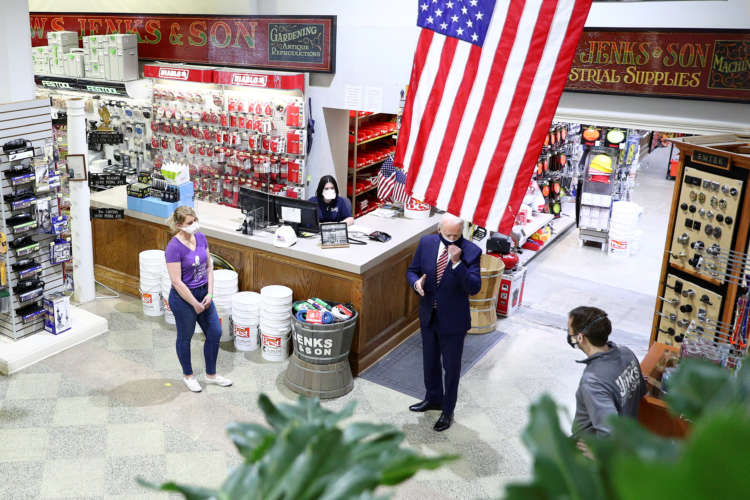 BRUSSELS (Reuters) – Struggling to get its vaccine campaign and economic recovery plan in gear, Europe can only watch with envy the stratospheric growth path projected for the stimulus-fueled U.S. economy.

But officials and economists caution against direct comparisons between the two, noting that much of the divergence masks in-built support that European workers and businesses get from the region’s more extensive welfare states, supplemented in many cases by generous furlough schemes.

The bigger question, they say, is whether Europe’s web of greater social protections will in the longer term stifle the remodelling of its economy which leaders hope will be one of the few positive takeaways from the health crisis.

“The European social contract leads to a slower rebound,” Daniel Gross, head of the Centre for European Policy think tank in Brussels, said of the implicit trade-off between securing existing jobs and businesses and allowing new ones to emerge.

“It might also impair medium term growth as structural changes are too slow,” he warned.

The same factors were at play when Europe emerged much more slowly than the United States from the 2008-09 global financial crisis. This time, the added concern is that delays with vaccine rollouts across the 27-nation EU make it vulnerable to further crippling lockdowns even as the U.S. economy returns to life.

Washington’s new $1.9 trillion stimulus package has shone a yet harsher light on the EU’s woes: the Federal Reserve this week projected a 6.5% growth rate for the United States in 2021 compared to a mere 3.7% forecast for the European economy.

The International Monetary Fund sees the United States returning to its pre-crisis output levels by year-end, six months ahead of the EU – and even that assumes Europe can master the pandemic and return to a degree of normality.

Critics have asked why Europe has not yet mustered anything of the sheer scale of the Biden package. But EU officials say that is like comparing apples with oranges.

“The EU is not a federal state, so support measures at both national and European level must be counted,” European Economics Commissioner Paolo Gentiloni told Reuters.

“And through our social systems, a much higher level of support kicks in automatically during a downturn than in the U.S.,” he added.

Gentiloni said that when existing welfare support and other state measures were combined with one-off emergency aid, total support in individual EU countries came to 8% of the economy, with governments providing a further 19% of GDP in liquidity support for 3.5 trillion euros ($4.17 trillion) in total.

By comparison, the United States in 2020 provided 11% of its GDP in automatic and discretionary measures and 5% in liquidity support, or some $3.35 trillion, EU officials estimate.

The United States has now pulled clearly ahead with its $1.9 trillion plan.

Gentiloni said, however, that the rest of the world would also benefit from its positive spillovers, including Europe, where all governments pledged to keep spending this year and next.

It is true that the EU suffered economically more in 2020 than the United States because the pandemic hit Europe before it went across the Atlantic, forcing lockdowns a month earlier.

But while the EU economy contracted more, European labour support has kept unemployment barely changed during the bloc’s biggest ever recession, with the jobless rate edging up from 6.5% to a peak of 7.8% and then easing again to 7.3% in January.

“The European social protection nets are deeply rooted in the social and political history of our countries,” the chairman of euro zone finance ministers Paschal Donohoe told Reuters.

“That’s why the EU has chosen to focus its response on protecting employment through the deployment of large job retention schemes, rather than relying on direct transfer payments,” he said.

No small matter is also the fact that, while stringent EU lockdowns hit the economy more than they did in the United States, they likely saved lives: in the EU there have been 5,365 COVID-19 cases and 127 deaths per 100,000 citizens, against 8,910 infections and 162 deaths per 100,000 Americans.

The most immediate challenge for Europe now is to get its vaccine campaign back on track after France, Germany and other nations resumed usage of AstraZeneca’s vaccine following safety reassurances from regulators.

After that, the question is whether Europe can make good its longer-term goal of transforming its economy to make it neutral in terms of carbon emissions by 2050, ready for the digitalised world and better prepared for future health emergencies.

To achieve that, the EU will jointly borrow, spend and repay 750 billion euros, most of which will be distributed to EU governments in loans and grants for investment and reforms. That is due to add two percentage points to EU growth by 2026.

While the first money from that package is to be paid out in the second half of this year, most of it will only come in 2022 and 2023. The United States is also considering another stimulus package focused on infrastructure later this year.

“There is a time lag between the two, let’s face it,” European Central Bank President Christine Lagarde told reporters last week, highlighting the speedy U.S. stimulus in her latest plea for quick disbursements from the EU recovery fund.

“…Our own fiscal measures are not kicking in yet. And we need that,” she added.

Where the dust never settles: A look ahead at the payments industry 2021