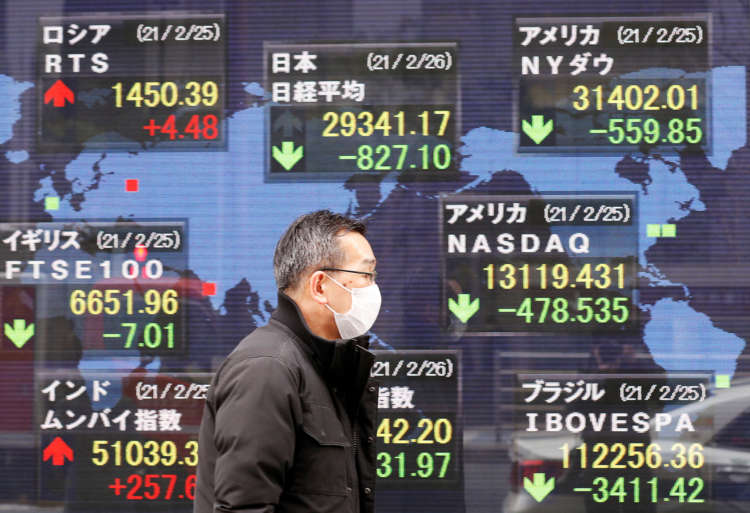 LONDON (Reuters) – U.S. bond yields on Friday eased from the 14-month highs reached the day before as markets looked to a U.S. economic recovery, while oil prices steadied after a slide.

Bond markets have experienced sharp moves this week with the U.S. Federal Reserve saying it expects higher economic growth and inflation in the United States this year, although it repeated its pledge to keep its target interest rate near zero.

“Every man and his dog is looking at bond yields,” said Giles Coghlan, chief currency analyst at HYCM. “Even though (Fed chair Jerome) Powell was dovish, bond yields marched higher, purely on anticipation that the Fed is behind the curve – the market is pricing rate hikes in.”

Yields on U.S. 10-year notes, which move inversely to prices and have been rising for the past seven weeks on growth expectations, spiked to their highest since January 2020 at 1.754% on Thursday. They eased to 1.6838% on Friday.

But SEB analysts said they expected the U.S. 10-year Treasury yield to hit 2% this year, “potentially already by the summer…propelled by the strong U.S. recovery outlook aided by new stimulus checks and a fast increase in the U.S. CPI (consumer price inflation)”.

Oil prices and the Nasdaq fell 7% and 3% respectively on Thursday on worries over faltering vaccine roll-outs and further slowdowns in Europe. France imposed a one-month lockdown in Paris and parts of the north.

Oil’s retreat on Thursday wiped out four weeks of gains in a single session amid worries world demand would fall short of high expectations.

Markets were unsettled by the Bank of Japan’s (BOJ) decision to slightly widen the target band for 10-year yields and tweak its buying of assets.

The bank portrayed the changes as a “nimble” way to make easing more sustainable, though investors seemed to take it as a step back from all-out stimulus. A decision to confine purchases to only TOPIX-linked ETFs knocked the Nikkei down 1.4%.

Chinese blue chips shed 2.6%, as the first high-level U.S.-China meeting of the Biden administration got off to a fiery start.

The rise in bond yields has weighed on gold, which offers no fixed return, leaving it down 0.2% at $1,740 an ounce.