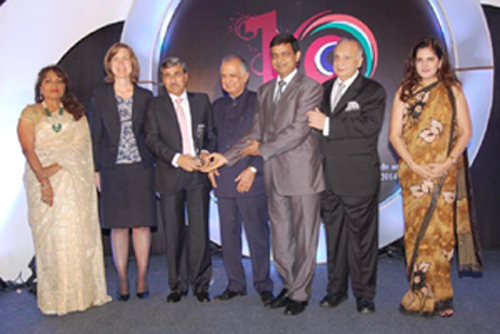 Aegis Limited, a global outsourcing and technology services company, announced that the Indo-American Chamber of Commerce (IACC), the only bi-lateral Chamber of Commerce for Indo-US business, has honored Aegis as the Overall Best Indian Company in the United States of America. This recognition was bestowed upon Aegis at the 10th Indo -American Trade Excellence (IATE) Awards held in Mumbai, India, in conjunction with the celebration of the American Independence Day.

Aegis was also presented an Award for Excellence in Corporate Social Responsibility for its significant investment in people practices and for being an equal opportunity employer covering persons with disabilities, gender inclusivity, socially and economically disadvantaged people, culturally and linguistically diverse people, mature age people and indigenous people encompassing 92 nationalities across 12 countries.

Aegis has been acknowledged for the third time by the Indo American Chamber of Commerce as the Best Indian Company in USA. The company is pioneering the next generation of outsourcing by aligning its strategy of providing end user customer experience to its clients through right-shoring model.

Through the I-ATE Awards, the Chamber celebrates corporate excellence and recognizes the Best U.S. Companies in India and Indian companies in US. These awards were presented in a number of categories and the winners were chosen from a pool of varied nominations received from US and India.

Sandip Sen, Global CEO, Aegis Limited, said “At Aegis, we are humbly pleased to receive this honor for the third time from the Indo-American Chamber of Commerce (IACC). Aegis USA has created stakeholder value, domain expertise and infused innovation across an entire value chain of its customers. Recognitions like these definitely motivate us to achieve greater heights”

Nanik Rupani, Regional President of The Indo-American Chamber of Commerce (IACC), West India Council said: “The distinguished jury while going through their application recognized Aegis’s wonderful accomplishments and achievements in the past few years and decided to honor Aegis with two Awards: Excellence in Corporate Social Responsibility  and Company of the Year. IACC extends heartfelt compliment to Aegis for their commendable work”.

Aegis currently employs more than 5,000 Americans across 8 centers in USA, serving some of the largest Fortune 500 companies across BFSI, Telecom, Healthcare, Technology, Travel and Hospitality vertical.

Since the acquisition of Aegis Communication Group by Essar in 2004, Aegis has grown over tenfold to become a significant player in the outsourcing industry. Through a judicious mix of organic growth and strategic acquisitions, the company has propelled its revenue growth from being a US based loss making unit with revenue of USD 52 million in 2004 to now a leader in the BPM paradigm with revenues of around USD 800 billion.