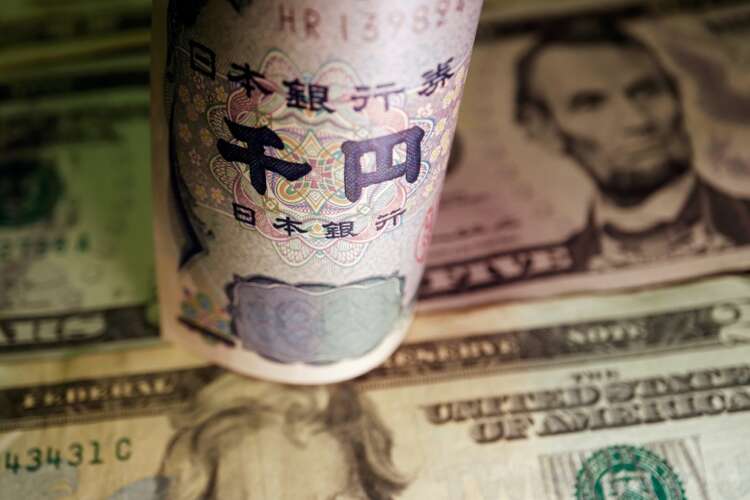 LONDON (Reuters) – The yen was on track for its biggest run of gains since the depths of the coronavirus crisis in March 2020, as rising U.S.-China tensions over Taiwan and deepening worries about a global economic slowdown boosted the appeal of safe-haven assets.

Against the dollar, the Japanese currency was on track for a fifth consecutive session of gains on Tuesday, taking its cumulative increase to nearly 4.5% in five trading sessions. In early London trading, the currency was up 0.6% at 130.78 yen, just below a high of 130.40 yen, a level last seen in early June.

Jitters about the impact of an impending visit to Taiwan by U.S. House of Representatives Speaker Nancy Pelosi weighed on stocks and sent investors scurrying into U.S. Treasuries.

The benchmark 10-year Treasury yield fell to 2.516%, its lowest since April, further narrowing the gap between ten-year U.S. debt and equivalent Japanese bonds to 236 basis points (bps), the lowest since early April.

The U.S. economy shrank for a second straight quarter, data released last week showed, intensifying an ongoing debate over whether the country is, or will soon be, in recession, with traders keenly watching for U.S. jobs data on Friday.

“U.S. data releases and the reaction in U.S. yields through the end of this week will be critical as JPY momentum has built a considerable head of steam here,” said John Hardy, head of FX strategy at Saxo Bank.

The Australian dollar fell nearly 1.5% after the Reserve Bank of Australia raised rates by 50 bps to 1.85%, in line with expectations.

The bank said that even though more tightening was expected, it was not on a pre-set path, which some investors interpreted as future policy tightening may not be as aggressive.

China’s offshore yuan touched 6.7957 per dollar, its weakest since mid-May. Some analysts attributed this partly to the tensions around Pelosi’s visit as well as poor economic data from China over the weekend.

Spain’s July jobless edges up 0.11% from June as uncertainty bites