Will the Covid effect drive contactless to displace chip and PIN? 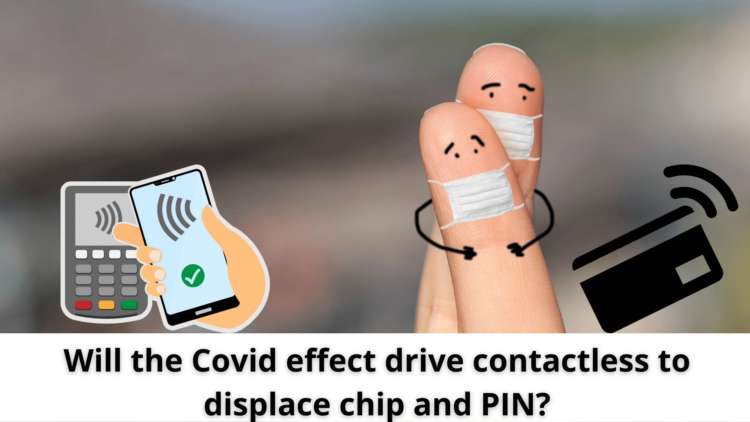 Contactless technology was originally designed to speed up card transactions in high footfall locations and to replace low-value cash payments of £10 and under. Contactless payments cards didn’t enter the UK until 2007 when Barclaycard, one of Europe’s largest card issuers, rolled out the very first mass-market contactless card.

Following the massive success of the London Olympics where millions of visitors used contactless to travel around the capital and make purchases in Olympic venues, in 2014 Transport for London allowed tube travellers to pay via their bank cards largely replacing its closed-loop contactless predecessor, the Oyster card. 2014 was notably a milestone year for contactless in the UK, with total spending rocketing to a record £2.32 billion which was a 255% increase on 2013. Contactless use continued to exponentially grow with UTP Group reporting that they saw contactless use triple to 30% in 2016, compared to just 10% the previous year.

The benefits of contactless are clear:

Covid and contactless – the tipping point for adoption

What nobody could have anticipated was the arrival of the Covid-19 pandemic in early 2020, which necessitated a further switch away from cash for hygiene reasons. With governments, retailers and industry bodies urging consumers to ditch cash in favour of safer and quicker non-cash payment methods, contactless truly reached the tipping point and became the favoured payment method during the pandemic. Consumers, who were previously wary or unconvinced of the benefits of contactless, quickly overcame their reluctance, particularly as many merchants refused to accept cash payments altogether.

The payment industry was quick to collaborate on finding a way to promote contactless as the Covid-secure way to pay. In April 2020, the UK’s contactless limit was raised to £45 to encourage more contactless transactions in the range of average values at grocery and food retailers like supermarkets. This had a dramatic effect as Visa reported that over 400 million extra contactless payments were made in the UK since the increase in the limit.

Now that contactless payment has displaced cash from low-value transactions, it could be about to displace chip and PIN payments too. Rishi Sunak, Chancellor of the Exchequer, announced in the 2021 budget that the contactless limit will increase to £100. This news has been received with great relief from both merchants and consumers. In a survey released by money expert Martin Lewis, over 53% of people said that they support the change.

UTP’s data suggests that cardholders will generally use contactless if they can – the 10%-15% of transactions that are still chip and PIN will relate to transactions over £45 or where the card prompts for a PIN transaction.

What’s helping the contactless uptake is that concerns about fraud and the security of transactions have proved to be largely unwarranted. According to UK Finance, contactless-only fraud equates to 2.5p in every £100 spent in the UK. Responding to concerns that raising the contactless limit could lead to increased levels of fraud, the Treasury said there was no significant rise in reported fraud when the limit was raised from £30 to £45 in 2020. It added that reported fraud equated to just 0.02% of the total spent using contactless cards since April 2020. When put into context of overall payment and banking fraud of £824.9 million in 2019, contactless payment deserves its reputation of being the fastest, safest and most secure way to pay.

It’s unlikely that chip and PIN payments will disappear any time soon, but what’s clear from UTP’s data is that contactless is set to take an even bigger slice of retail transactions and boost consumer confidence in turn. While cards may give way to more convenient form factors like wearable devices and mobile wallets, contactless technology is here to stay and will drive even more innovation in the future.