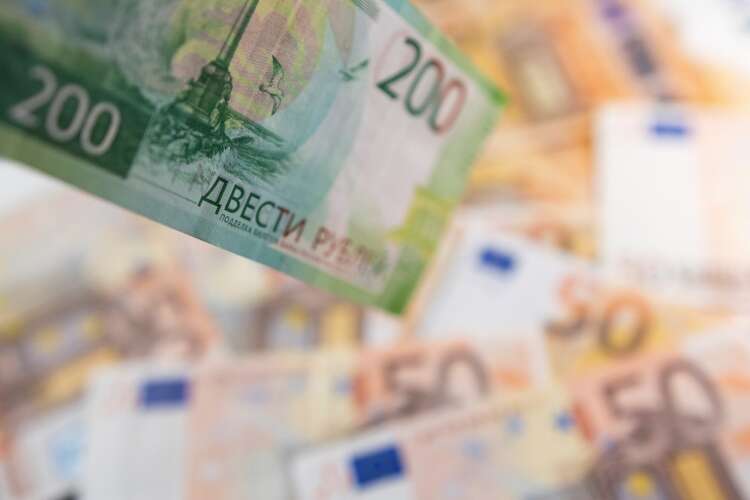 MOSCOW (Reuters) -The rouble weakened on Friday, giving up huge gains that had seen it soar to an eight-year high against the euro, as investors slashed foreign currency holdings and President Vladimir Putin signed treaties annexing four Ukrainian regions.

The rouble has been supported by capital controls and a collapse in imports since Western sanctions were imposed over Russia’s actions in Ukraine and companies left the market in droves. Geopolitical risks also remain elevated, with more U.S. and EU sanctions expected soon.

The sanctions threat has led some investors to reduce their dollar holdings, fearing that restrictions may paralyse Russia-based trading in the greenback, analysts have said.

“Apparently the market is expecting the introduction of new sanctions by the EU which could further complicate the circulation of the euro, which is why we see supply exceeding demand, which leads to a decrease in the (euro) on Moscow Exchange,” said Alfa Capital analyst Alexander Dzhioev.

Otkritie Research said companies may be speeding up the sale of FX from their overseas accounts.

Geopolitical pressure sent the benchmark MOEX Russian index to its lowest since Feb. 24 – the day Russia sent troops into Ukraine – on Monday, but the approval of energy giant Gazprom’s dividend payments drove the market higher.

“An approval…of the payment should be positive both for the stock and for the market in general as Gazprom has the largest weight in indices,” said BCS Global Markets.

Gazprom shares were underperforming the wider market, down 3.4%.

Analysts at VTB My Investments said they had a neutral view on Gazprom due to uncertainty about gas exports and the company’s increased tax burden, expecting its dividend for the second half of 2022 to be about five times lower than the 51.03 roubles ($0.8522) per share approved on Friday. ($1 = 59.8790 roubles)