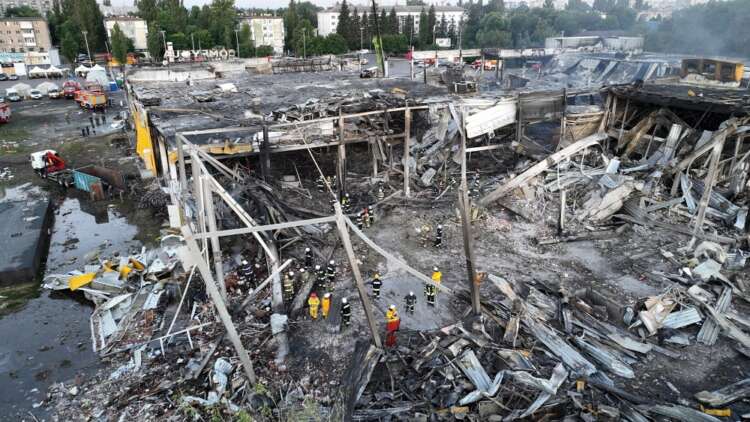 KREMENCHUK, Ukraine (Reuters) – War crimes investigators on Tuesday inspected the charred remains of a shopping mall devastated by a Russian missile strike as Ukraine mourned the victims of what the Ukrainian prosecutor general called “crimes against humanity”.

A day after the attack in which at least 18 people were killed, the city of Kremenchuk in central Ukraine declared a day of mourning and fire fighters cleared away rubble.

Residents left flowers in black vases on a wall near what was left of the mall. A small yellow and blue national flag jutted out of one of the vases, and a row of stuffed toy animals sat beside them.

Exhausted fire fighters sat on a curb alongside another of the shopping centre’s walls. Others lay on a grass embankment, smoking and scrolling on their phones.

“We pulled out five bodies. We didnâ€™t find anybody alive,” said a fire fighter who gave his name only as Oleksandr.

Members of a team of international legal experts gathered beside the mall and briefed Ukrainians wearing uniforms identifying them as “war crimes police.”

She said one missile had struck a factory near the shopping centre but that it was closed and could not be considered a military target.

Wayne Jordash, a British lawyer working with an international initiative to assist Ukraine’s war crimes investigations, said the first indications were that the factory that was hit had “nothing to do with the military”.

“On the face of this, this looks like a war crime. It looks like it’s a deliberate attack on a civilian object,” Jordash, speaking from Kremenchuk, said.

Russia said the incident was caused by a strike on a legitimate military target. Its defence ministry, quoted by the RIA state news agency, said Russian forces had fired missiles at a storage depot for Western weapons in Kremenchuk, and the detonation of stored ammunition there had caused the fire at the nearby mall.

Russia denies intentionally targeting civilians in its “special military operation” in Ukraine which has destroyed cities, killed thousands of people and driven millions from their homes.