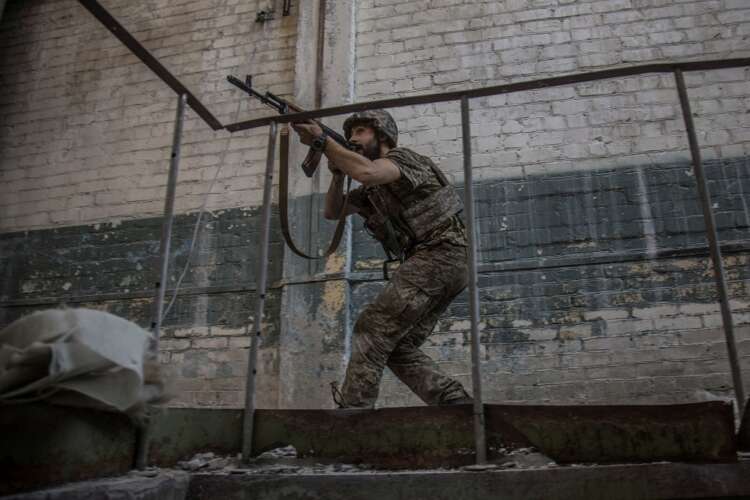 (Reuters) – Ukraine reported renewed pressure from Russian forces in eastern Ukrainian battlegrounds on Wednesday, a day of commemoration in both countries to mark the anniversary of Hitler’s invasion of the Soviet Union in 1941.

* The Russians are advancing towards the eastern Ukrainian city of Lysychansk, attacking buildings of police, state security and prosecutors and taking nearby settlements, the governor of the surrounding Luhansk region, Serhiy Gaidai, said.

* Zelenskiy said the military situation in Luhansk was very difficult and his advisor Oleskiy Arestovych said Russian forces could cut off Lysychansk, and the fiercely-contested city of Sievierodonetsk across the Siverskyi Donets river, from Ukrainian-held territory.

* Ukraine’s second biggest city Kharkiv, further north, came under Russian attack again overnight, Arestovych said, and the nearby village of Chuhuiv was under fire again, a day after at least 15 civilians were killed there.

* Intense fighting was going on along the border with Russia in northeastern Ukraine, the governor of the Sumy region, Dmytro Zhyvitsky, said.

* A fire broke out at Russia’s Novoshakhtinsk oil refinery on Wednesday morning after two Ukrainian drones were spotted over the plant, Russia’s TASS news agency said, citing an unidentified source in the local authorities. The refinery lies close to Russia’s border with Ukraine.

* Six children were among 11 wounded in Chasiv Yar on Tuesday when the Russians fired at a beach on Lake Zolota Rybka, the governor of Ukraine’s eastern Donetsk region, Pavlo Kyrylenko, said on Wednesday. One person was killed, he said, adding without providing evidence, that cluster munitions were used.

* Casualties have amounted to about 55% of the original strength of the forces of the self-proclaimed Donetsk People’s Republic(DPR), one of Russia’s proxies in eastern Ukraine, Britain said. Reuters could not immediately confirm the battlefield accounts.

* Indonesian President and G20 chairman Joko Widodo will visit counterparts in Ukraine and Russia next week and press for a peaceful resolution to their conflict, his foreign minister said on Wednesday, the first such trip by an Asian leader.

* Russia warned Lithuania on Tuesday that it would face measures of a “serious negative impact” for blocking some shipments by rail to Moscow’s Baltic Sea enclave of Kaliningrad.

* Members of the Russian delegation to the Organization for Security and Co-operation in Europe (OSCE) were denied British visas to attend the next session, Vladimir Dzhabarov, first deputy head of Russian upper house’s international affairs committee, said on Wednesday.

* Estonia summoned the Russian ambassador on Tuesday to protest about a violation of its airspace by a Russian helicopter. Moscow did not immediately comment.

* “Russian forces are now hitting the city of Kharkiv in the same way that they previously were hitting Mariupol – with the aim of terrorising the population,” Arestovych said.

Saudi crown prince, Erdogan to meet in Turkey with ‘full normalisation’ in sights