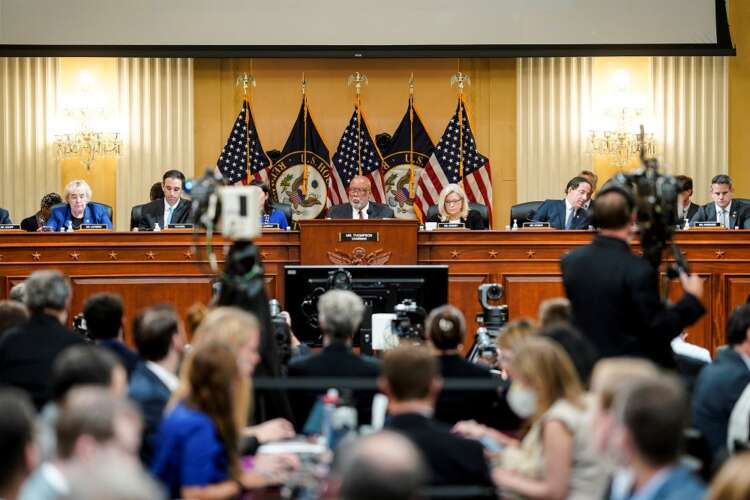 By Patricia Zengerle and Richard Cowan

WASHINGTON (Reuters) – U.S. lawmakers accused then-President Donald Trump on Tuesday of inciting a mob of followers to attack the U.S. Capitol on Jan. 6, 2021 in a last-ditch bid to remain in power as Congress was formally certifying his election loss.

The House of Representatives select committee’s seventh hearing in five weeks focused on the attack by extremists on that day, including Oath Keepers and Proud Boys, two pro-Trump groups that investigators say helped plan the attack, as well as QAnon, a right-wing conspiracy theory movement.

“The committee will explain how as a part of his last-ditch effort to overturn the election and block the transfer of power, Donald Trump summoned a mob to Washington, D.C., and ultimately spurred that mob to wage a violent attack on our democracy,” said the committee chairperson, Democratic Representative Bennie Thompson.

Committee members said Trump had been told by advisers in his administration and his campaign that he had lost the presidential election, but chose to disregard their advice.

He was ultimately responsible for the chaos that followed, they said.

“President Trump is a 76-year-old man. He is not an impressionable child. … He is responsible for his own actions and his own choices,” said Republican Representative Liz Cheney, the panel’s vice chairperson.

The committee’s seven Democrats and two Republicans have used the hearings to build a case that Trump’s efforts to overturn his defeat in the November 2020 election constitute illegal conduct, far beyond normal politics.

Trump, a Republican who has hinted he may seek the White House again in 2024, denies wrongdoing and has falsely asserted that he lost only because of widespread fraud that benefited his opponent, Democrat Joe Biden.

The hearing also was to look at links between right-wing militant groups, including the Oath Keepers, Proud Boys and the QAnon internet conspiracy movement, Trump and his allies, including Roger Stone and Michael Flynn.

The Oath Keepers provided security to Stone, a self-described “dirty trickster” who has advised Trump off and on for decades, in Washington on Jan. 5 and 6, 2021. Flynn, a retired Army general, served as Trump’s first national security adviser.

Committee members said Trump incited the riot through his refusal to admit he lost the election and through comments like his Dec. 19, 2020, call on Twitter for supporters to flock to Washington for a “big protest,” saying, “Be there, will be wild.”

They also have questioned the role of some members of Congress in Trump’s Republican Party. Committee aides said Tuesday’s hearing would explore the involvement of some lawmakers.

The attack on the Capitol, following a speech Trump gave at a rally outside the White House, delayed certification of Joe Biden’s election for hours, injured more than 140 police officers and led to several deaths.

In response to a request for comment, Stone said he was facing the “tactic of guilt by association.”

In an email, he said, “Any assertion that I knew in advance about, was involved in or condoned any of the illegal actions at the Capitol is false. Any claim that I knew from any member of the Proud Boys or Oath Keepers about any plan for illegal activities on January 6th is also false.”

An attorney for Flynn did not respond to a request for comment.

Neither Flynn nor Stone has been charged in connection with the attack on the Capitol and both have invoked their Fifth Amendment constitutional right against self-incrimination before the Jan. 6 committee.

Trump pardoned both after they were convicted or pleaded guilty in cases unrelated to the Capitol attack.

The Oath Keepers and Proud Boys gained national attention during the Trump administration for their support of the Republican president. Trump urged the Proud Boys to “stand back and stand by” during a September 2020 debate as he campaigned against Biden.

About 800 people, including members of both groups, have been charged with taking part in the Capitol riot, with about 250 guilty pleas so far.

Trump and his supporters – including many Republicans in Congress – dismiss the Jan. 6 panel as a political witch hunt, but the panel’s backers say it is a necessary probe into a violent threat against democracy.

JetLearn, the world’s first Web 3.0 online academy for K-12, raises €1.2m in seed round to launch its platform in the UK