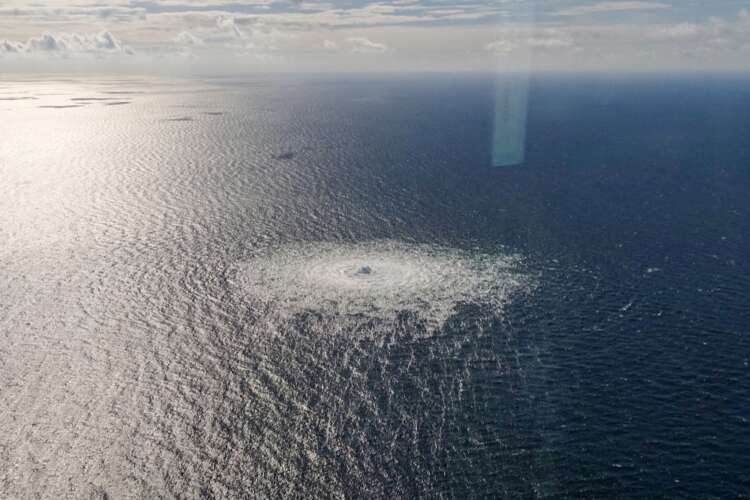 By Johan Ahlander and Terje Solsvik

STOCKHOLM/OSLO (Reuters) – Sweden sent a diving vessel on Monday to the site of Russian gas pipelines in the Baltic Sea that ruptured last week following blasts in the area, to probe an incident that has added new tension to Europe’s energy crisis.

Europe is investigating what caused three pipelines in the Nord Stream network to burst in an act of suspected sabotage near Swedish and Danish waters that Moscow quickly sought to pin on the West, suggesting the United States stood to gain.

“The coast guard is responsible for the mission, but we are supporting them with units,” a spokesperson for the Swedish navy, Jimmie Adamsson, told Reuters. “The only one we are naming is HMS Belos, which is a submarine rescue and diving vessel.”

The Swedish coast guard said Nord Stream 1 had stopped leaking, but an overflight suggested gas was still draining out of Nord Stream 2 and bubbling to the surface over a 30 metre (32 yard) radius.

The Kremlin doubled down on allegations that the West was to blame for the ruptures on Monday, saying that the United States was able to increase sales and prices of its liquefied natural gas (LNG) as a result.

Washington has strongly denied any involvement. European countries suspect sabotage, but have declined to say who could be behind it.

Kremlin-controlled Gazprom also said flows could resume at the last remaining intact pipeline in the Nord Stream 2 network, a suggestion likely to be rebuffed given Europe blocked Nord Stream 2 on the eve of Russia’s invasion of Ukraine in February.

“If a decision is made to start deliveries through Nord Stream 2’s line B, natural gas will be pumped into the pipeline after the integrity of the system has been checked and verified by supervisory authorities,” Gazprom said.

The suggestion follows remarks by Russia’s deputy prime minister on Sunday that the Nord Stream network could be repaired, given time and enough funds.

Nord Stream has been a flashpoint in the energy standoff between the West and Moscow that has pummelled Western economies and fuelled a cost-of-living crisis.

Russia steadily reduced gas flows via Nord Stream 1 this year before halting them altogether at the end of August, blaming technical difficulties caused by Western sanctions. European countries said Moscow was using energy as a weapon.

Nord Stream 2 was never operational, and Western countries have resisted calls from Russia to drop their opposition to the project.

Jolted by the Nord Stream ruptures, European countries have started strengthening security and surveillance around critical infrastructure that could be vulnerable to attack.

Italy has strengthened surveillance and controls on underwater energy and telecommunications cables, a source told Reuters.

Focus has also turned to the security of other gas supply lines.

Eni, the biggest importer of Russian gas in Italy, at the weekend said Russia had halted all gas flows through the Tarvisio entry point, though its chief executive on Monday blamed the halt on short-term technical issues.

The stoppage of flows through the Tarvisio entry point “has absolutely nothing to do with geopolitical factors. It is due to the fact that Gazprom would have to pay a monetary guarantee for the transport of gas from Austria to Italy that was not there before,” Claudio Descalzi said.