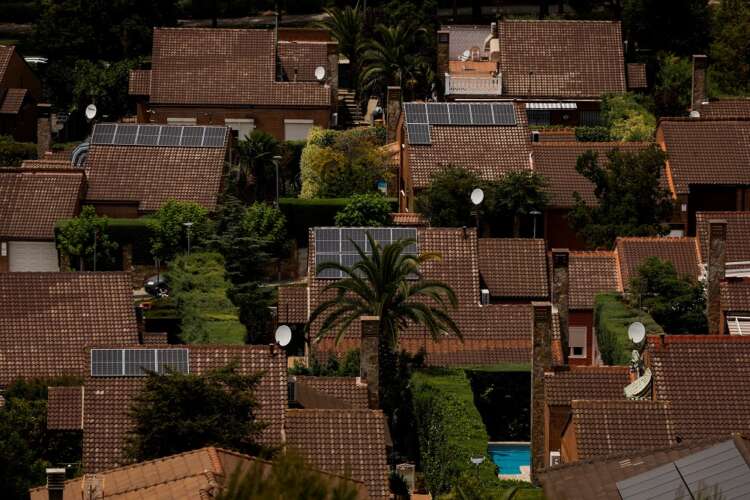 MADRID (Reuters) – Standing by his swimming pool at his home in an affluent Madrid suburb, retired engineer Juan Manuel Cosmes Cuesta enthuses over the 30% state subsidy he will get for installing solar panels that have already more than halved his monthly power bills.

“Lots of people we know – neighbours, my wife’s friends in the area – are doing it and everyone is happy,” he said.

Not so in less wealthy areas a short drive away.

“I understand that for these subsidies you have to put up part of the money first and that it is a lot for many people,” said Manuel Blanco, a 44-year-old plumber who lives in the 1970s-built San Pascual district.

Others said the top priority was lifts as they struggle up the many flights of stairs in old apartment blocks.

“What we need most here are elevators to help the elderly,” said Candela Garcia, 73, who has lived in the working class Orcasitas neighbourhood south of the Spanish capital since she was a child.

As Europe doubles down on green ambitions made more urgent by a fuel and cost of living crisis, the disconnect between Madrid’s suburbs highlights a wider dilemma for policy-makers: how to ensure low-income groups are not left further behind as economies embrace the energy transition ahead.

Cosmes Cuesta is comfortably off rather than rich, but he can afford the wait for his state subsidy.

“I don’t know when they will pay it, but eventually they will,” he said.

Grievances over social justice were at the heart of the “yellow vest” protests in France in 2018 that prompted President Emmanuel Macron to abandon an ecology tax on petrol and diesel, which was meant to limit fossil fuel use, but was seen as hitting those who could least afford it.

Similarly, questions of fairness arise as governments hand out subsidies to try to reduce emissions and also reliance on imported Russian fossil fuel through increased use of renewable energy and improved insulation.

Spain is using EU grants as part of a goal to make 510,000 dwellings more energy-efficient by 2026, notably targeting the apartment blocks in which two thirds of Spaniards live and that are mostly over two decades old and poorly insulated.

In some cases, subsidies can cover up to 80% of costs and include upfront payments or tax breaks. Construction groups, such as Ferrovial or OLHA, and banks, including BBVA and Santander, are encouraging take-up by offering to help with the application paperwork and financing.

As a further sweetener for apartment-dwellers, some projects price in the installation of elevators.

Aid for accessibility ramps and lifts remains the subsidy most sought by residents’ associations from the Madrid housing office, as 40% of Spain’s residential buildings with four floors or more do not have an elevator, official figures show.

Regarding the new subsidies, residents’ associations, consultants and researchers told Reuters low-income apartment owners were either unaware of them or reluctant to sign up.

Andimat, the national association of companies that sell insulation products, calculated that for a full renovation of a typical six-floor block – changing windows, facades and roofs – a 65% subsidy of the 159,000 euro ($167,363) cost would be available.

That would cut energy consumption by 59%, but each household would still have to find 4,600 euros up-front.

But Andimat director Luis Mateo said there was no “sales boom in refurbishment”.

Contrast that with the brisk trade in subsidised solar panels in the wealthier suburbs of Madrid and Barcelona, where one-family houses dominate: Christopher Cederskog, chief executive and co-founder of solar supplier SunHero, expects least at 30% more installations this year.

“My clients are asking a lot about subsidies,” Cederskog told Reuters.

The two-speed take-up means in practice that while Blanco the plumber saw the electricity bill for his apartment double to 270 euros per month in the winter, retired engineer Cosmes Cuesta saw his bills drop from 120 euros in December to just 43 euros in April after his panels were installed.

“Our society has not sufficiently internalised the improvement of energy efficiency”, said María José Piccio-Marchetti, Director General of Housing and Rehabilitation of the Community of Madrid. “It is a change of concept.”

As Belgium, France, Italy and others all seek to improve energy efficiency and energy bills surge, Marie Le Mouel, affiliate fellow at Brussels-based Bruegel Institute, said now is the time to offer grants – but the challenge is to design the schemes properly.

“Energy efficiency of building stock is kind of the next big item on the decarbonisation agenda,” she said. “In Europe every country is struggling to find the right mechanisms to make this work.”

Italy’s “super-bonus” scheme is even more generous than Spain’s. The state pays 110% of the cost of turning buildings green, from insulation to solar panels to replacing boilers and window fittings – has created jobs and boosted the economy, but has also run into issues of fairness.

“The benefits have gone to very few people, mainly the well-off and well-qualified with houses in the historic centres of large cities, particularly in the northern half of the country,” small-business lobby and think tank CGIA said in a report.

Silvia Pastorelli, a climate and energy campaigner for Greenpeace, said one approach could involve grants for the less well-off and subsidised loans for the wealthier. She praised Belgium’s scheme for linking grant size to household income.

“You shouldn’t need to own the roof above you or the walls around you to benefit from solar panels or insulation, and you shouldn’t need tens of thousands in your account to renovate if you struggle to pay your heating bills,” she said.

Spanish Prime Minister Pedro Sanchez’ left-leaning government acknowledges the problem but says the scheme is unprecedented and it is essential to make a start.

Authorities and businessmen are betting that once the first buildings manage to pay less for electricity following renovation work and subsidies, more owners will seek those aids as they see that their neighbours have succeeded.

David Lucas, general secretary for housing and urban agenda at the Transport Ministry, estimated the 4 billion euros allocated to this plan would be spent by 2026 as 9.3 million homes in the country need to be renovated.

“Billions of euros cannot be a problem, it has to be an opportunity,” he said.

(Additional reporting by Gavin Jones in Rome and Belen Carreno in Madrid; editing by Mark John and Barbara Lewis)