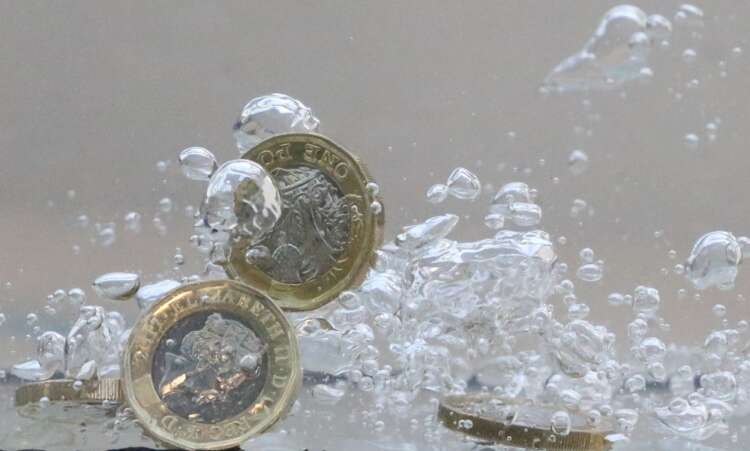 LONDON (Reuters) – Sterling surged against a weakening U.S. dollar on Monday as markets scaled back some of their bets on Federal Reserve rate hikes, but the UK currency’s rally was capped by political risks and persistent recession fears in Britain.

The greenback retreated after several Federal Reserve officials signalled they did not favour stepping up the pace of rate hikes. [FRX/]

“The U.S. dollar is on the back foot this morning as fears of a 100 bps rate hike from the Fed recede and risk appetite improves. This has provided some support for cable,” said Jane Foley, Head of FX Strategy at Rabobank London.

But political uncertainty and recession fears will continue to weigh on the pound, traders said.

The five Conservative contenders vying to be Britain’s next prime minister clashed over tax cuts in a second televised debate on Sunday, with the two frontrunners – Rishi Sunak and Liz Truss – stepping up their battle on the economy.

Foley said investors will be watching closely this week’s UK Financial Services bill “in the hope that greater incentives to investors will not be de-stabilised by any undue move away from regulatory prudence”.

The focus will turn to UK data later in the week, with jobs and inflation figures expected on Tuesday and Wednesday, which could give more clues to how the Bank of England will act to try to tame surging inflation. Headline CPI is expected to have accelerated to 9.2% year-on-year in June.

The BoE is grappling with soaring inflation and a cost-of-living crisis, having raised rates five times since December as it tries to stop the surge in inflation from becoming embedded in Britain’s economy.

In a data heavy week, traders will also be watching retail sales and flash PMIs figures in Britain, which could add to recession fears.

Data on Monday showed that asking prices for British homes advertised for sale this month were 9.3% higher than a year earlier, down from a 9.7% rise in June as mortgage costs rise sharply for first-time buyers, property website Rightmove said.