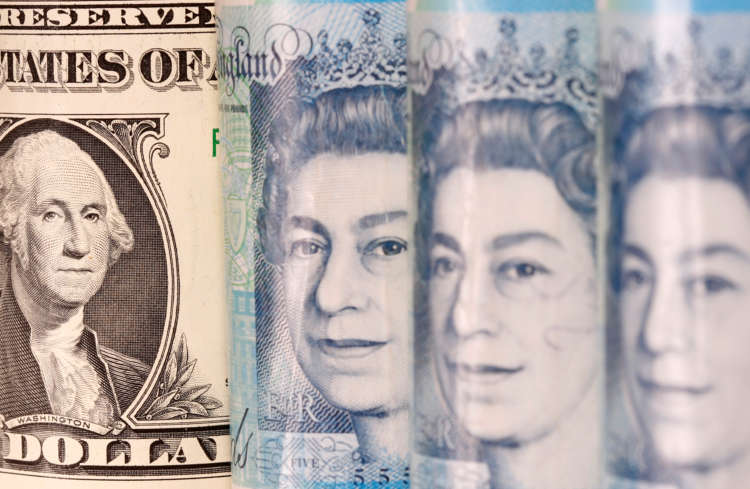 LONDON (Reuters) – Sterling hit $1.40 against the dollar for the first time in nearly three years on Friday, as analysts continued to bet Britain’s quick pace of vaccinations will lead to an economic rebound from the country’s worst crash in output in 300 years.

The pound is the best performing G10 currency this year, up 2.3% against the dollar as investors bet that Britain’s quicker pace of vaccinations will lead to a recovery from the worst annual fall in economic output in three centuries.

“My sense is the vaccine currency label attached to the pound is in part behind the move through $1.40,” said Neil Jones, head of FX sales, financial institutions at Mizuho Bank. 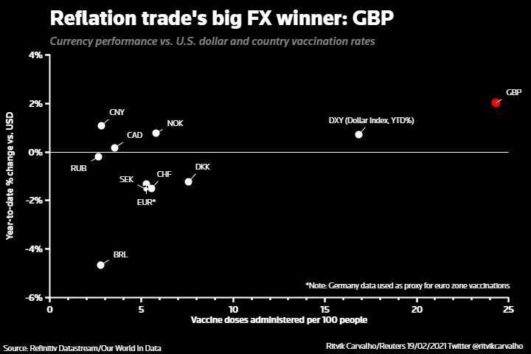 The pound has also gained more than 3% against the euro this year, with analysts attributing the single currency’s weakness to the pound as reflective of other European countries’ relatively slower vaccine rollout. On Friday it traded 0.2% lower to the euro at 86.74 pence.

On Monday, UK Prime Minister Boris Johnson is expected to announce the government’s next steps in fighting the coronavirus, which may include plans to take Britain out of its third national lockdown.

“The apparent success of its vaccine campaign notwithstanding, we think that the UK government would err on the side of caution,” said Valentin Marinov, head of G10 FX research at Credit Agricole in London.

“In turn, this could disappoint FX investors who have been aggressively adding to their GBP longs in anticipation of a more rapid opening up of the UK economy and have pushed the currency into overbought territory.”

Speculators increased their long positions on sterling – bets the currency will increase in value against the dollar – to their highest levels since March 2020 in the week up to last Tuesday, CFTC data shows.

Towards the end of last year, speculators held short positions on the pound as Britain and the EU raced to sign a post-Brexit trade deal.

The currency’s fall in the wake of the Brexit vote made imports more expensive, pushing up inflation. Now, the pound’s strength could hurt export-heavy companies that form Britain’s FTSE 100 index, which earn a majority of their revenue in dollars.

Brexit: a rollercoaster ride for the pound 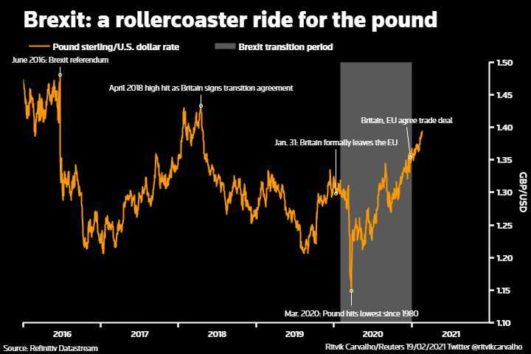 British retail sales tumbled in January as non-essential shops went back into lockdown, official data showed. Retail sales volumes slumped by 8.2% compared with December, a far bigger fall than the 2.5% decrease forecast in a Reuters poll of economists and the second largest on record.

“The Brexit issue has disappeared and we’re now focusing on COVID-19 and how hard the UK economy has been hit,” said Niels Christensen, chief analyst, research and risk solutions at Nordea Markets, noting Britain has been hit hardest among OECD countries.

“We are now looking at a more positive outlook for the UK economy. And even though expectations of a rate cut from the Bank of England have not completely disappeared, the risk for that has definitely diminished.”

Christensen added that an unwinding of short positions from the end of last year has also benefited sterling.

Money markets as of 1057 GMT on Friday showed no expectations of negative rates from the Bank of England as far out as August 2022.