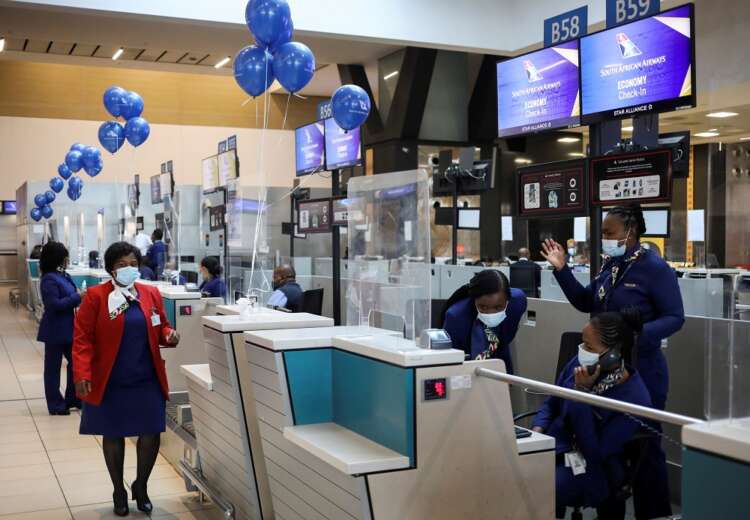 JOHANNESBURG (Reuters) – Terry and Roger Hugo, both retirees in their 70s, couldn’t wait to see their grandchildren come over to visit South Africa from Britain for the first time, after cancelling last year’s Christmas plans because of COVID-19.

Now they are mortified at having to call everything off again after a new coronavirus variant detected in South Africa prompted Britain to slap a travel ban on its former colony.

“We’re absolutely gutted. I can’t tell you how upset we are with this whole situation,” said Terry, 74, breaking into tears on the leafy porch of their Johannesburg home as she recounted the things they were looking forward to doing with grandkids Stella, 6, and Clara, 8.

“We were planning to take them to Sun City, the kids wanted to go to Pilanesburg (national park) to see the wild animals. That’s all been stopped,” said Terry, a South African, sitting beside her British husband Roger, 79, owner of a video store.

“We’re just hoping and praying they can come next Christmas,” she added.

South African authorities have questioned Britain’s decision to ban flights from six southern African countries over the new COVID-19 variant, complaining that it seems rushed. There is as yet no data to confirm whether or not the variant is more infectious or better able to evade immunity from the vaccines or from previous infections.

Scientists have so far only detected the B.1.1.529 variant in relatively small numbers, mainly in South Africa but also in Botswana, Hong Kong and Israel, but they are concerned by its high number of mutations.

Britain, which regards it as the most significant variant yet found, has banned flights from South Africa, Botswana, Lesotho, Eswatini, Zimbabwe and Namibia.

British-South African couple Wakule Tshabangu, 37, and Claire Almond, 42, are in a similar bind. Their son, Siyamthanda, nearly 3, was excited at the prospect of seeing Claire’s parents, Tim and Carol, come over from Britain.

“I’m pretty devastated,” Almond said. “My mum literally couldn’t talk this morning, she was sobbing so much.”

Combined with sadness is a feeling that South Africa is being unfairly singled out, simply for doing a better job of identifying variants than many other countries.

“The frustrating thing is it feels a bit like they’re playing political football with our lives,” Tshabangu said. “It feels like one rule for us, and another for the others.”