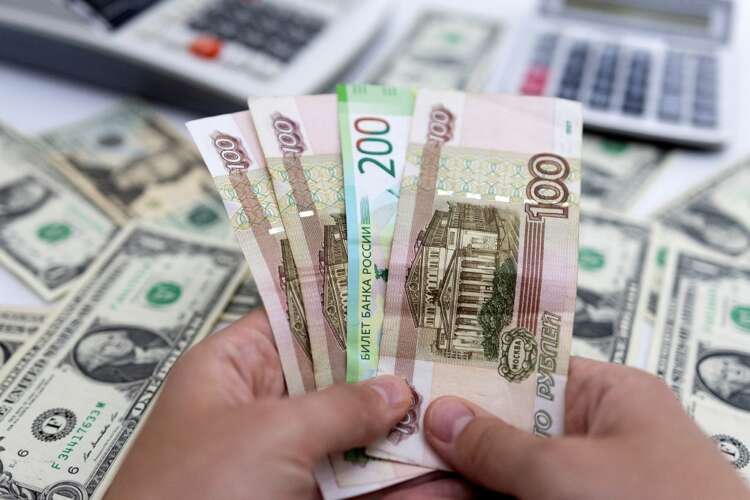 (Reuters) -The Russian rouble surged to new multi-week highs on Friday while stocks fell in volatile trade as Moscow mobilises some 300,000 extra troops for the conflict in Ukraine.

Despite President Vladimir Putin’s mobilisation order, the rouble hit its highest level versus the U.S. dollar and euro since July in trading in Moscow.

Currency controls and month-end tax payments, which see Russia’s exporters convert their foreign currency earnings into roubles to make payments to the treasury, are providing a boost to the rouble despite geopolitical headwinds, analysts say.

The increased supply of foreign currency from exporters and reports of more sanctions against Moscow from the European Union, which make foreign currency investments less attractive, were supporting the rouble, said SberCIB Investment Research in a note.

“Moreover, according to data published in the media on Russia’s budget parameters, there will be no return to the budget rule and foreign currency purchases linked to this next year,” SberCIB said.

“In connection with this, risks of the rouble weakening have decreased,” SberCIB analyst Yury Popov said.

The finance ministry hiked taxes on oil and gas and said it would not return to its usual budget rule until 2025.

The budget rule dictates how much of Russia’s revenues from oil and gas exports are used for day-to-day government spending and how much is diverted into the government’s sovereign wealth fund. Designed to smooth boom-and-bust periods, it was suspended earlier this year due to Russia’s new financial situation.

However, Russian stocks were deep in the red on Friday as markets remain jittery over how Russia’s mobilisation drive will affect the conflict. The dollar-denominated RTS index dropped 0.9% to 1,163.3 points. The rouble-based MOEX Russian index was 4.1% weaker at 2,100.4 points.

Russian shares have seen heightened volatility all week in response to the mobilisation order and as Moscow stages referendums in four regions of Ukraine on joining Russia.

After surging in Thursday’s session on news it had enough free cash flow to pay interim dividends, shares in Gazprom fell back in line with the wider market on Friday, down 2.6% in rouble terms.

“Today the Russian market is dominated by negative sentiment … The Friday factor seems to be stronger than usual as market players are not risking keeping their long positions over the weekend,” said Zarina Saidova, an analyst at Moscow-based Finam investment firm.