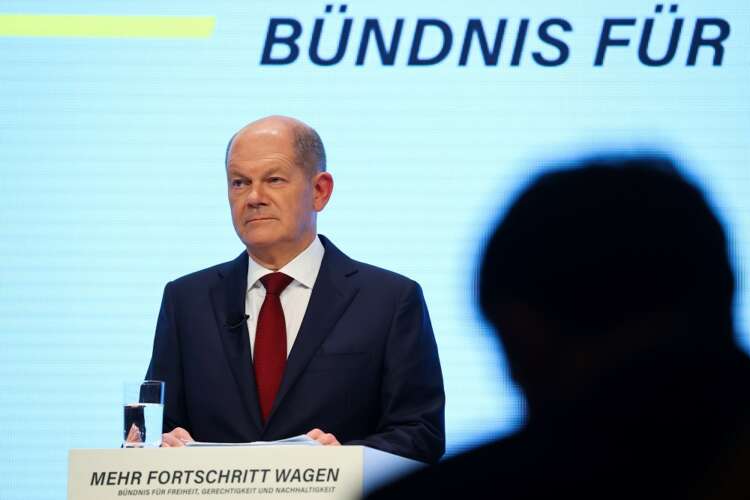 BERLIN (Reuters) -The centre-left Social Democrats (SPD), the ecologist Greens and the liberal Free Democrats (FDP) presented their three-way agreement for a new government to take over from a coalition led by conservative Angela Merkel on Monday. [L8N2SF1MQ]

Following are comments from analysts, businesses and associations:

“This is a coalition agreement for high-income earners and the super-rich who want to do something for their ecological conscience… The minimum wage increase is not enough to fight the division of society into ever poorer and ever richer people.”

“I welcome the coalition agreement presented by the SPD, the Greens and the FDP. A very committed agreement for Europe, soon a new government for a new Franco-German roadmap and a reinforced ambition for the EU.”

“The German coalitionâ€™s decision (to observe the nuclear ban Meeting of States Parties) represents an important step forward for the German people who have steadfastly opposed nuclear weapons for decades. Germany has now stated clearly their goal of moving towards a nuclear-free Germany and world.”

“The stronger climate policy focus of the coalition agreement is important. We welcome that the coalition recognises the great importance of network infrastructure as the backbone of the energy transition – especially with regard to financing and investment conditions.”

“The coalition agreement is a very good basis for mastering future tasks in the transport and logistics industry.”

“The coalition agreement falls short in terms of an industrialized ramp-up of synthetic fuels, so-called eFuels, as quickly as possible.”

“We expressly welcome the statements in the coalition agreement on insurance regulation.”

“At first glance, the coalition agreement gives a very mixed picture: It is disappointing in some. So there will no longer be fair taxation in the future, neither with property tax nor with Inheritance tax. There are a number of positive points in the area of â€‹â€‹labor and social affairs.”

“The agreement is good news for Europe and the euro zone.”

“The traffic light coalition has decided not to suspend the debt brake beyond 2022, although it is currently unclear whether the pandemic will be over by then. Maybe this will be reconsidered.”

“In the area of â€‹â€‹mobility… there are a number of central components that we absolutely need in order to advance the mobility transition by 2030. Now it is important to put these building blocks into practice. The industry is ready for it.”

PRESIDENT OF THE BFW CONSTRUCTION AND PROPERTY ASSOCIATION ANDREAS IBEL

“The construction of 400,000 apartments per year is a very ambitious goal… This is a benchmark for the new government… We hope that the real estate industry will finally have a strong point of contact with an independent construction authority.”

“The signature of the car companies is obvious. The outcome in the field of transport is in breach of climate protection decisions by the Constitutional Court… The coalition agreement is not enough to meet the Paris climate protection limit.”