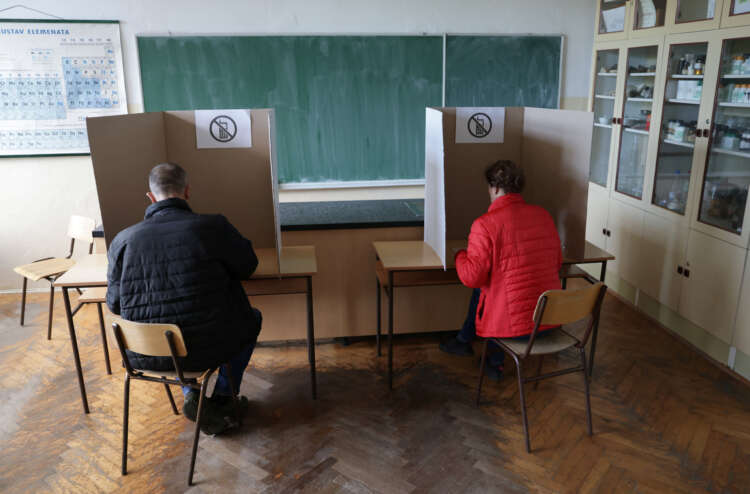 SARAJEVO (Reuters) -Moderate Bosniak candidate Denis Becirevic is leading in the run-up for the seat on Bosnia’s tripartite inter-ethnic presidency, preliminary results based on a partial vote count showed on Monday.

Becirevic, the Social Democratic Party (SDP) member who was backed by 11 opposition civic-oriented parties, won 55.78% of the votes over Bakir Izetbegovic, whose nationalist Bosniak (Bosnian Muslim) Party of the Democratic Action (SDA) party has been in power since the end of the war in 1996.

Izetbegovic, who according to the election commission won 39.31% of the votes, conceded defeat late on Sunday.

Bosnia’s voters turned out to choose the country’s new collective presidency and lawmakers at national, regional and local levels, in a contest between entrenched nationalists and economy-focused reformists.

Bosnia is going through its worst political crisis since the end of its war in the 1990s, prompted by the separatist policies of the Serb leadership and threats of blockades by Bosnian Croats.

“It is time for a positive turnaround in Bosnia,” Becirovic told reporters after proclaiming victory.

Election authorities said early Monday Borjana Kristo of the nationalist Croatian Democratic Union (HDZ) won 51.36% of the votes for the Croat presidency member and moderate Zeljko Komsic came second with 48.64% of the votes, based on 54.73% of counted ballots.

On Sunday, Komsic declared victory after SDA preliminary results put him ahead of Kristo with 70.73% of the votes, based on 80% of the ballots counted.

Zeljka Cvijanovic, an ally of the Bosnian Serb separatist pro-Russian leader, Milorad Dodik, won 51.65% of the votes counted in the race for Serb member of the Bosnian presidency.

The commission said it would continue to update preliminary results daily as of Monday.

Bosnia comprises two autonomous regions: the Serb-dominated Serb Republic and the Federation shared by Bosniaks, or Bosnian Muslims, and Croats, linked by a weak central government. The Federation is further split into 10 cantons. There is also the neutral Brcko district in the north.

The race for the job of Bosnia’s autonomous Serb Republic president between Dodik and the opposition’s Jelena Trivic, an economy professor, still seemed inconclusive, based on parties’ rival results.

Komsic’s declaration of victory was harshly criticised by Croat political parties, which complain that majority Bosniaks elect their presidency member. They have threatened to block the formation of a regional government if Komsic wins.

But just an hour after polls closed, the international peace overseer for Bosnia imposed changes to the election law, imposing unblocking mechanisms and strict deadlines to safeguard the functioning of the Federation.