HIGHEST EVER NUMBER OF ACHIEVERS FROM OVERSEAS IN CISI 2014 AWARDS 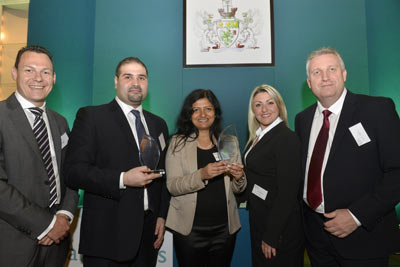 The global reach of the CISI was highlighted at its Annual Awards for top exam performers. Of 96 prize winners honoured at a ceremony at Mansion House, London, a record 20 were from outside the UK, including from India, the UAE, Singapore, Bahrain, Lebanon, Qatar, and the Republic of Ireland and, for the first time, France.

Awards were given in 54 categories with the winners being selected from takers of nearly 37,000 exams in 74 countries.

HSBC was the firm celebrating the highest number of winners with six of its employees picking up eight prizes between them.

CISI Managing Director Ruth Martin said: “With public interest and scrutiny in the financial services sector continuing, the outstanding results of our award winners serves as a beacon of professionalism and excellence and we are delighted for them.”

The exclusive sponsor of the awards was RBC Wealth Management.

Three candidates from outside the UK shared an overall award for the Investment Operations Certificate (IOC), a globally established CISI qualification for administration and operations staff.

They are Mei Hui Tan and Joice Tjen from Singapore and Manish Jajodia from India.

Mei Hui is an Associate in Wealth Management Operations at Morgan Stanley while Joice is an analyst at Royal Bank of Scotland.

In addition to his success in the IOC, Manish, Subject Matter Expert for Reconciliation at HSBC Electronic Data Processing in Kolkata, won the Exchange-Traded Derivatives award. Highlighting the benefits of achieving “globally-recognised certification” through the CISI, Manish said: “Undoubtedly taking these qualifications puts the candidate in a better position than their peers.”

The highest achievement in the IOC was awarded in memory of Pen Kent FCSI(Hon), a long-standing Honorary Fellow of the Institute who passed away recently. He had a distinguished career at the Bank of England.

There were two further winners from Singapore of the Over-the-Counter Derivatives award – a unit of the IOC – which was shared by seven candidates.  They were Wenjie Eddy Boo of DBS Bank and Raghuraman Uthaman from Barclays Capital. Raghuraman said studying for the CISI qualification had “definitely given me an edge over other analysts in terms of market and product knowledge.”

Steve Wagner, Corporate Strategy Manager at Lamprell, a Dubai-based oil and gas construction company that is listed on the London Stock Exchange, was the first winner of the ICAEW/CISI Diploma in Corporate Finance. He also secured the prize for Corporate Finance Strategy & Advice – one of two exams which form the Diploma.

He said: “The qualification has specifically helped me to perform my role by building my understanding of the Listing Rules and Takeover Code, both of which are central to working for a listed company.”

Steve faced the challenge of relocating to Dubai and juggling a number of projects while sitting the exams.

Martin said that CISI qualifications “set you off to a good start by covering broad and useful topics relevant for most positions in the financial industry.”

Robin said that the knowledge he had gained in studying the Financial Markets module, part of the Masters in Wealth Management, had “improved the quality of my investment research and portfolio management.”

In the education sector, for the first time, the winner of the Certificate for Introduction to Securities & Investment (Schools) Award came from Jersey. He was Lewis Young from Hautlieu School in St Saviour.