GET INSPIRED… HOLD A PAUWOW ON YOUR MOBILE

The new social networking phenomena that’s about to go global

Pauwow is a brand new social networking app that lets you crowdsource answers from your mobile, harnessing the combined knowledge of the Pauwow network and the people you connect with on other social networking sites, all from one platform.

Pauwow is the easiest way to ask any question and quickly receive answers from the people that you care about.  No more tabulating comments and likes, the app automatically calculates the consensus giving you a clear picture on what the group really thinks.  This feature allows you and your friends to see the real time depiction of what the group is saying eliminating the noise found in group communication. 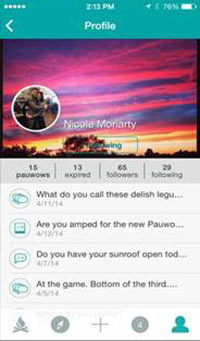 crowdsource answers from your mobile

Jamie Moriarty, co-founder of Pauwow says: “We set out to design a social networking application that would allow individual and business users to communicate freely by leveraging their existing social media sites; but we also wanted it to be about people sharing their knowledge and opinions to help other people make decisions and we’ve achieved that with Pauwow.

“We all know two heads are better than one, right? Well, that’s what Pauwow is all about, it’s the ‘we’ factor rather than the ‘me’ factor. It’s about co-operation and communication on a global level.

“The app went live in March and already there has been an incredible reaction from people all over the world. Questions are being posted from places like Brazil, Azerbaijan and Australia and our Facebook page is already filling up with positive comments and so is Twitter, which is amazing.

“We’ve all experienced the challenges of trying to plan something with a group.  Using group emails, group text messages, or posting on social networking sites can lead to a confusing discussion where nothing is decided.  That’s why Pauwow is so useful, the group can easily congregate around a specific question and add their vote as well as comment and decisions can easily be determined based on the consensus. 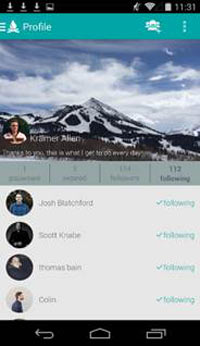 HOLD A-\ PAUWOW ON YOUR MOBILE

“Or the frustration you feel when trying to find a decent restaurant in a place you don’t know. You can ask your contacts on social networking sites, but the onslaught of responses can be hard to sift through. With Pauwow, you can ask publicly and someone, somewhere will be able to tell you, and others can support those answers. You get real answers, from real people, in real time.

“It’s fun too. Imagine you’re at a concert and the band says “we’re sending a Pauwow for you to vote for the next song” and 20,000 people vote. “In an instant you know what song the audience likes best, all of those people, connected at the same moment, thinking about the same few songs, I think that’s an awesome thing to be able to do.

“We’re looking to add some other great features, one being Geo-tagging.  This would allow users to receive offers or discounts from their favourite stores based on if they choose to follow those brands on Pauwow so you can bag yourself a bargain away from home”.

It also provides businesses and brands with a marketing tool that can reach customers quickly. Asking Pauwow users to vote for a certain concept or product is a fantastic way to gauge opinion and find out what’s trending.  Keep the conversations running for as long as you want to, so, if the answers to your questions produce more questions, then you carry on. 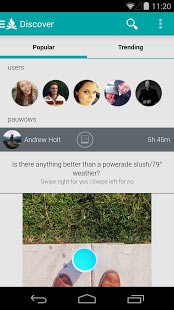 Jamie added, “Getting public opinion in such a short space of time is such a useful concept. Local authorities could use it to get feedback from residents about public amenities and improvements, which could improve public relations and speed up the decision making process”.

Although the app is now available to download, Pauwow has confirmed that there are some exciting new features in the pipeline, including more categories in the discovery section, creation of interest groups, push notifications and enhancements to the Enterprise version of the app. Pauwow is available on iOS and Android and you can check out the Video from Vimeo here.