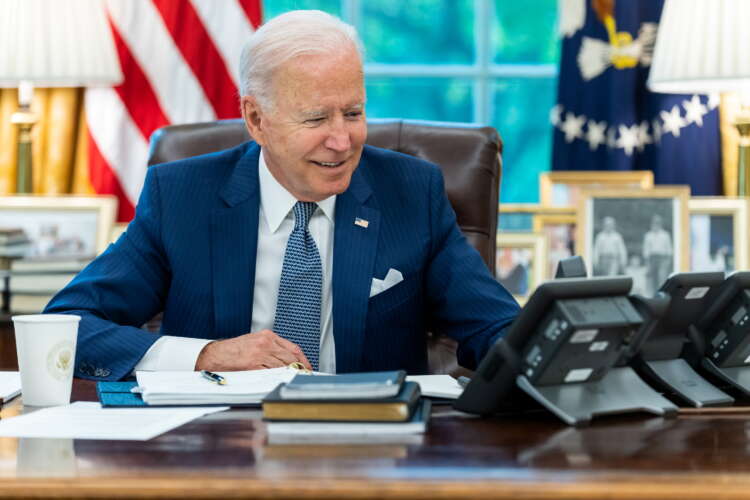 By Michel Rose and Jeff Mason

PARIS/WASHINGTON (Reuters) -The U.S. and French presidents moved to mend ties on Wednesday, with France agreeing to send its ambassador back to Washington and the White House acknowledging it erred in brokering a deal for Australia to buy U.S. instead of French submarines without consulting Paris.

In a joint statement issued after U.S. President Joe Biden and French President Emmanuel Macron spoke by telephone for 30 minutes, the two leaders agreed to launch in-depth consultations to rebuild trust, and to meet in Europe at the end of October.

They said Washington had committed to step up “support to counter-terrorism operations in the Sahel conducted by European states” which U.S. officials suggested meant a continuation of logistical support rather than deploying U.S. special forces.

Biden’s call to Macron was an attempt to mend fences after France accused the United States of stabbing it in the back when Australia ditched a $40 billion contract for conventional French submarines, and opted for nuclear-powered submarines to be built with U.S. and British technology instead.

Outraged https://www.reuters.com/world/us-move-dislodge-france-australia-submarine-deal-is-incoherent-french-ministers-2021-09-15 by the U.S., British and Australian deal, France recalled its ambassadors from Washington and Canberra.

“The two leaders agreed that the situation would have benefited from open consultations among allies on matters of strategic interest to France and our European partners,” the joint U.S. and French statement said.

“President Biden conveyed his ongoing commitment in that regard.”

U.S. Secretary of State Antony Blinken and his French counterpart Jean-Yves Le Drian, interacting for the first time since the submarine crisis erupted, had a ‘good exchange’ on the margins of a wider meeting at the United Nations on Wednesday, a senior State Department official told reporters in a call.

The two top diplomats were likely to have a separate bilateral meeting on Thursday. “We do expect that they’ll have some time together bilaterally tomorrow,” the official said, and added that Washington ‘very very much welcomed’ France and European Union’s deep engagement in the Indo-Pacific.

“The president has had a friendly phone call with the president of France where they agreed to meet in October and continue close consultations and work together on a range of issues,” she told reporters.

Asked if Biden apologized to Macron, she said: “He acknowledged that there could have been greater consultation.”

The new U.S., Australian and British security partnership (AUKUS) was widely seen as designed to counter China’s growing assertiveness in the Pacific but critics said it undercut Biden’s broader effort to rally allies such as France to that cause.

Biden administration officials suggested the U.S. commitment to “reinforcing its support to counter-terrorism operations in the Sahel” region of West Africa meant a continuation of existing efforts.

France has a 5,000 strong counter-terrorism force fighting Islamist militants across the Sahel.

It is reducing its contingent to 2,500-3,000, moving more assets to Niger, and encouraging other European countries to provide special forces to work alongside local forces. The United States provides logistical and intelligence support.

Pentagon spokesman John Kirby said the U.S. military would continue to support French operations, but declined to speculate about potential increases or changes in U.S. assistance.

“When I saw the verb reinforce, what I took away was that we’re going to stay committed to that task,” he told reporters.