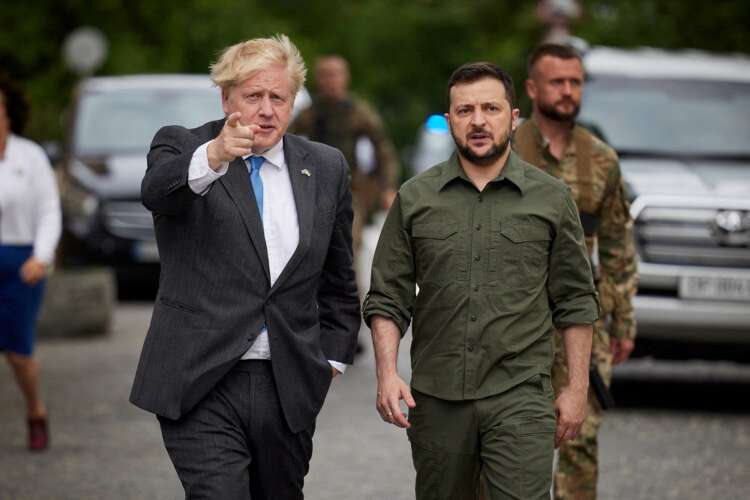 KIGALI (Reuters) – Prime Minister Boris Johnson said on Thursday Britain was willing to assist with demining operations off Ukraine’s southern coast and was considering offering insurance to ships to move millions of tonnes of grain stuck in the country.

Russia’s Feb. 24 invasion of Ukraine and blockade of its Black Sea ports has prevented the country, traditionally one of the world’s top food producers, from exporting much of the more than 20 million tonnes of grain stored in its silos.

This has helped push food prices to record highs and left tens of millions of people struggling to eat, a crisis which Western officials say could last two years.

Turkey is trying to broker talks between the United Nations, Ukraine and Russia to create a possible safe sea corridor in the Black Sea, but Moscow wants some Western sanctions lifted first to facilitate its grain and fertiliser exports.

“There is a job of work to be done. We are working with the Turks and other European friends and allies to see what we can do,” Johnson told Reuters in an interview during a visit to Rwanda for a Commonwealth summit.

Johnson said Britain was considering all options when asked whether the government could provide sovereign guarantees for shipping insurance.

“What the UK possibly has to offer, most of all, is expertise when it comes to maritime insurance, and a lot of expertise in moving goods through should we say contested areas of the sea,” he said.

Asked if Britain was ready to help Ukraine demine the area, Johnson said: “Yes, I don’t want to get into the technical or military details, but you can take it from what we have already done in supplying equipment to the Ukrainians to help themselves protect that we are certainly talking to them at a technical level to help demine Odesa.”

Any mine clearing effort would be the biggest attempted since the Iran-Iraq war of the 1980s, and any project to clear mines off Ukraine would take several months.

British Foreign Secretary Liz Truss said separately on Thursday that urgent action needed to be taken within the next month, ahead of the next harvest, to maintain supply.

Britain, the United States and the European Union, which are supplying arms to Ukraine, have accused Russia of stoking a food crisis by preventing grain exports from Ukraine – which accounts for about one tenth of global wheat exports.

The European Union’s foreign policy chief earlier this week said Russia was committing a war crime by blocking the export of millions of tonnes of Ukrainian grain.

Ukrainian President Volodymyr Zelenskiy said this month that millions of people could starve because of the blockade of Ukraine’s Black Sea ports which he said had left the world “on the brink of a terrible food crisis”.

Russia denies responsibility for the food crisis, blaming it on Western sanctions imposed on Moscow that have led to a jump in global food prices. It also says that the West has spread lies about the causes of the crisis.

While acknowledging there were multiple factors why food inflation was so high, Johnson accused Putin of trying to hold the world to “ransom” with the blockade.

“It is absolutely unconscionable,” he said. “That supply could help people around the world, it could help some of the poorest countries in the world.”