UK budget fashion chain Primark to invest 140 million stg in stores
Our website publishes news, press releases, opinion and advertorials on various financial organizations, products and services which are commissioned from various Companies, Organizations, PR agencies, Bloggers etc. These commissioned articles are commercial in nature. This is not to be considered as financial advice and should be considered only for information purposes. It does not reflect the views or opinion of our website and is not to be considered an endorsement or a recommendation. We cannot guarantee the accuracy or applicability of any information provided with respect to your individual or personal circumstances. Please seek Professional advice from a qualified professional before making any financial decisions. We link to various third-party websites, affiliate sales networks, and to our advertising partners websites. When you view or click on certain links available on our articles, our partners may compensate us for displaying the content to you or make a purchase or fill a form. This will not incur any additional charges to you. To make things simpler for you to identity or distinguish advertised or sponsored articles or links, you may consider all articles or links hosted on our site as a commercial article placement. We will not be responsible for any loss you may suffer as a result of any omission or inaccuracy on the website. 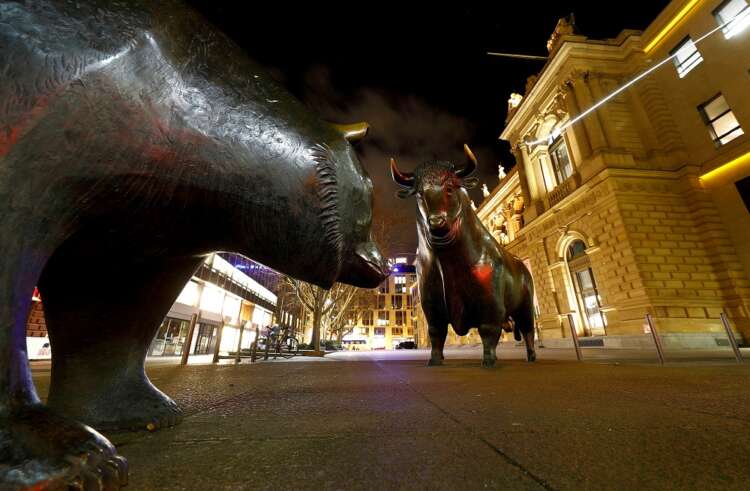 By Yoruk Bahceli and Nell Mackenzie

LONDON (Reuters) – The collateral against potential losses posted on derivatives trades at Eurex has risen to a record high of around 130 billion euros ($128 billion) in the face of highly volatile markets and stubborn inflation, Erik Mueller, CEO of Eurex Clearing, told Reuters on Thursday.

This is up from around 100 billion euros needed during the COVID-19 outbreak that wreaked havoc on world markets in early 2020. Mueller told Reuters that risk models at Eurex Clearing suggested that the current environment meant there was a greater need to bolster liquidity.

Eurex Clearing is part of Deutsche Boerse’s Eurex Exchange, one of Europe’s biggest futures and options exchanges and clearing houses.

Analysts say that increased demand for collateral could be one sign of heightened investor angst given decades-high inflation and aggressive rate hikes from major central banks, not to mention Russia’s invasion of Ukraine which is driving an energy crisis in Europe.

“In fixed income, as a guide very roughly, the requirements (for collateral) have doubled,” Mueller told Reuters during a briefing.

“But looking at the last 10 years in rates volatility may not be a good guide to what’s happening in the next 10 years.”

The ICE BofA Move Index, a measure of volatility in the U.S. fixed income market, for instance, last week jumped to its highest level since March 2020 as British markets fell under acute selling pressure.

He noted increased talk in the industry about the “optimization of collateral” more generally.

Top-rated government bonds such as U.S. Treasuries or German bonds are often used in markets as collateral to raise cash. That has at times created a squeeze on triple-A rated German debt given how scarce it is after years of European Central Bank bond-buying.

“Because of the demands on collateral and the scarcity of high-quality collateral, firms are having to make sure they maximize the opportunity they have with the collateral they’ve got,” Mueller said.

Many pension funds were caught out during a surge in British government bond yields last week that forced the Bank of England to step in. The funds had to stump up cash to meet collateral demands.

(Reporting by Yoruk Bahceli in Amsterdam and Nell Mackenzie and Karin Strohecker in London; Writing by Dhara Ranasinghe; Editing by Matthew Lewis)