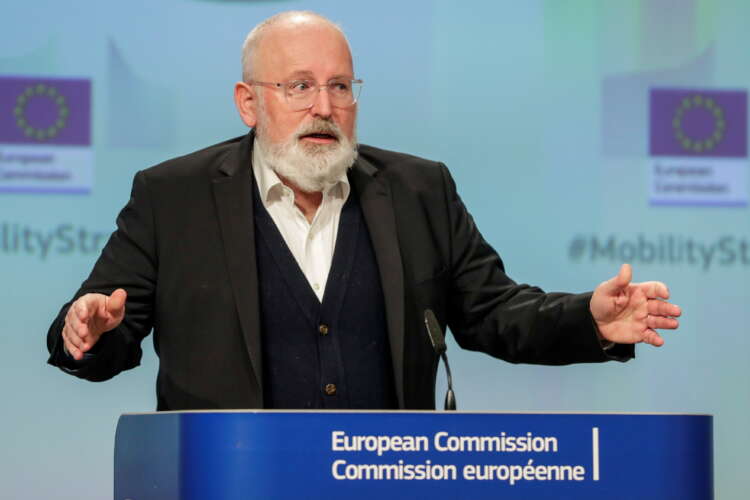 BRUSSELS (Reuters) – The European Commission will set up a fund to support vulnerable households if their fuel bills increase as a result of its plan to expand carbon pricing to transport and buildings’ heating systems, the EU’s climate policy chief said on Wednesday.

The Commission will next month propose a package of policies to slash planet-warming emissions faster this decade, including fuel tax changes and tougher renewable energy targets. Among the proposals being considered is a CO2 emissions trading system for transport and heating systems.

The plan has stoked concerns from some EU countries and lawmakers in the European Parliament, who say it could hike fuel costs for citizens, hitting low-income and vulnerable groups hardest.

EU climate policy chief Frans Timmermans on Wednesday said that any such proposal would be accompanied by measures to mitigate the social impact.

“Part of the revenues generated from emissions trading in road transport and buildings could be put into a dedicated fund, so that Member States can use those revenues to compensate the cost of this transition to vulnerable citizens,” Timmermans told the European Economic and Social Committee.

Channelling carbon revenues back to citizens could help them switch to green alternatives such as zero-emissions home heating systems or electric vehicles, he said.

The EU already uses an emissions trading system, or carbon market, to put a price on pollution in the power sector and industry. The scheme forces power plants and manufacturing facilities to buy a permit for every tonne of CO2 they emit.

Buildings – which produce more than a third of the bloc’s CO2 emissions with many heated by fossil fuels and not energy efficient by modern standards – and transport would be in a new, separate system.

The Commission’s upcoming proposals aim to ensure the EU meets a target to to cut its net greenhouse gas emissions at least 55% by 2030 against 1990 levels.

That goal will require an extra 10-percentage-point cut in combined emissions from sectors not currently covered by the EU carbon market – including transport, buildings and agriculture.