DR RICHIE NANDA, EXECUTIVE CHAIRMAN OF THE SHIELD GROUP NAMED 'ENTREPRENEUR OF THE YEAR' AT THE ASIAN BUSINESS AWARDS 2014 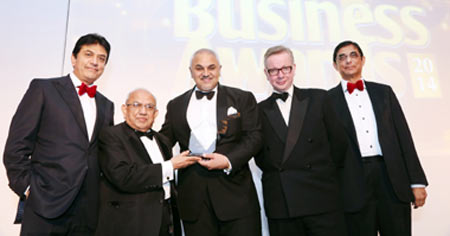 Dr Richie Nanda, Executive Chairman of The Shield Group, the UK’s ninth largest security solutions provider and TOPSGRUP, India’s most preferred security solutions brand and the first Indian MNC to acquire a security company in the UK, was awarded ‘Entrepreneur of the Year’ at the annual Asian Business Awards (ABAs) 2014, on Friday 11th April 2014, held at the Park Plaza Westminster Bridge Hotel, London.

In a glittering ceremony held at the renowned hotel in London, Dr Nanda was named ‘Entrepreneur of the Year’ for his vision, drive and hard work in harnessing the vast potential of The Shield Group and leading the company to its current status as the UK’s ninth largest business security solutions provider. Dr Nanda’s companies provide security for some of the world’s leading brands such as Apple, IBM, TATAs, high profile events such as the IPL and World Cricket Champions League, international celebrities, VIPs and prestigious venues such as 30 St Mary’s Axe (The Gherkin) and the Imperial War Museums.

This year’s event celebrated 17 years of the Asian Business Awards which are organised by Asian Media & Marketing Group (AMG) to celebrate UK Asian business excellence, acumen and achievement. Applauding Dr Nanda at the event included a burgeoning and highly influential group of enterprising individuals, public figures and global business laureates primarily from the Indian Subcontinent including Keith Vaz MP, Chairman of the Home Affairs Committee, Priti Patel MP for Witham, one of the UK’s richest billionaire’s Gopichand Hinduja, Sri Prakash Lohia, Founder and Chairman of Indorama Corporation and Sir Anwar Parez OBE, Chairman of Bestway Group to name but a few. He was presented his award by brothers Vijay and Bhikhu Patel who founded Waymade Healthcare plc and Michael Gove MP, Member of Parliament for Surrey Heath and Secretary of State for Education.

Dr Nanda also celebrated another accolade on the night after it emerged that he has been featured in the Asian Rich List 2014, which is launched each year at the ABAs to profile the country’s 101 richest Asians. Compiled by a panel of external experts and editors of AMG, it is the definitive guide to ultra-high net worth individuals and UK Asian Business success stories. Accounting only for the UK wealth of the richest Asians, the combined value of the 101 wealthiest Asians in 2014 stood at a staggering £52bn with Dr Nanda’s entry of £115M, positioning him as the 55th richest Asian in the UK.

In commenting about his award win Dr Richie Nanda said: “I am so honoured and humbled to have been recognised with the award for the ‘Entrepreneur of the Year’. I would like to thank the eminent panel of judges at AMG for voting for me. 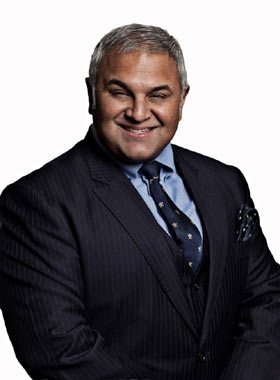 ‘I am extremely proud and delighted at The Shield Group’s success story. I owe this recognition tonight to my talented, dedicated and hard-working team at The Shield Group, who have worked tirelessly to develop and grow the company further, and to take it to the heights that it has currently reached. We have tremendous plans for the future of The Shield Group, and our aim is to position Shield amongst the top four security solutions providers in the UK within the next two years.’

‘Entrepreneurship is the bedrock of our society and I am a great believer that it is the platform for social change on a global level. Being entrepreneurial isn’t just about making the right business decisions but also about taking the right risks and adopting a fresh approach to business life that pushes you to embark on a new challenge and creative path.’

Dr Nanda is acknowledged by many as a pioneer and the most prominent spokesperson of the evolving global security industry. Dr Nanda took over the reins of TOPSGRUP at the age of 22 when it was a struggling company with revenues of £30,000 pa and 8 customers, to build it into India and UK’s leading security group with revenues in excess of £150 million, 93,000 employees, 120 offices and approximately 8,500 customers. Dr Nanda did this by re-writing the rules for the Indian and British security sector with innovative and forward-thinking initiatives.

In 2012 he acquired the UK’s 13th largest (now the 9th largest), national security solutions provider, The Shield Group, following the completion of a £19.5M acquisition of Shield, initiated with a 51% controlling stake in 2008. The acquisition positioned Dr Nanda as the only entrepreneur of an Indian MNC to purchase a 100% stake in a British security company.

The award and rich list entry also reflected the exceptional results Dr Nanda has seen across the business with his pioneering introduction of the Total Security Solutions (TSS) model to Shield which comprised of creating structured teams by sector expertise with clear account management and responsibilities assigned to workforce and continuous management and feedback. The TSS model helped the company secure major contract wins from clients who had previously tried the “total facilities management” model in a recession, but now understand the importance of having a specialist security provider.

PwC: UK ANNUITIES MARKET COULD DECLINE BY UP TO 75% AS CONSUMERS LOOK TO ALTERNATIVE RETIREMENT PRODUCTS