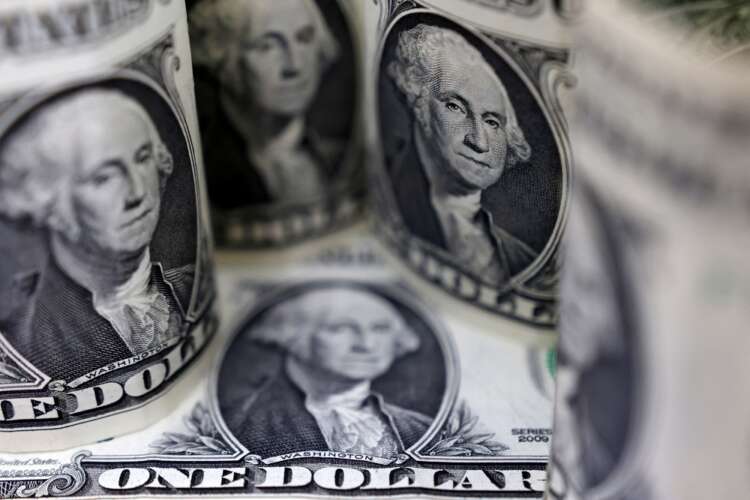 LONDON (Reuters) – The dollar lurked below recent highs on Tuesday as traders awaited this week’s key U.S. inflation print for any signs that price pressures are finally abating and that the need for further aggressive U.S. interest rate hikes is easing.

Unexpectedly strong U.S. jobs data on Friday had boosted the greenback, which posted its biggest daily percentage gain since mid-June against the yen that day as investors ramped up bets on a 75 basis point (bps) rate rise in September.

But the currency has pulled back since then as focus shifted to Wednesday’s July consumer price index (CPI).

The dollar index, which measures the currency’s value against a basket of other peers, was marginally lower at 106.23. It held below a more than one-week peak hit on Friday at 106.93.

“I’m a bit concerned about inflation tomorrow. The market has been wrong-footed all year and if we get a strong core inflation print that will nail expectations for a 75 bps rate hike in September,” said Kenneth Broux, a currency strategist at Societe Generale in London.

“It’s too soon to say it’s time to short the dollar as the Fed may have to do more.”

The U.S. Federal Reserve hiked rates by a hefty 75 bps in June and July. Money-market futures show traders see about a two-thirds chance of a 75 bps hike next month and have started pushing expectations for rate cuts deeper into 2023.

The gap between two and 10-year Treasury yields, a reliable recession indicator, has grown to its largest in two decades. [US/]

“The market understandably is waiting for the numbers to then reprice, rather than moving in anticipation of them,” said Ray Attrill, head of foreign exchange strategy at National Australia Bank in Sydney.

The dollar’s haven status, though, makes the greenback’s reaction a little harder to predict, especially as growth and geopolitical worries swirl.

Consumer confidence slid in Australia for a ninth straight month and the Australian and New Zealand dollars edged lower as London trade got under way.

China extended military drills near Taiwan, and the self-ruled island’s foreign minister said China was using the drills launched in protest against U.S. House Speaker Nancy Pelosi’s visit as an excuse to prepare for an invasion.