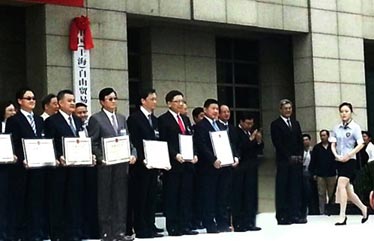 DBS Bank (China) Limited (“DBS China”) announced today that it has received approval from the China Banking Regulatory Commission Shanghai Bureau to set up a sub-branch in the newly established China (Shanghai) Pilot Free Trade Zone (FTZ). DBS China is among the first batch of banks, and one of the first two foreign banks, to operate an outlet in the FTZ, the sub-branch will focus on servicing corporate clients in the FTZ at its first stage, complementing and strengthening the bank’s established network in Shanghai.

Headquartered in Shanghai, DBS China was one of the first foreign banks and the first
Singapore bank to locally incorporate in China in May 2007. DBS China currently operates nine outlets in Shanghai. The new sub-branch in the FTZ will be the bank’s tenth outlet in the city.

DBS Bank (China) Limited Chief Executive Officer Neil Ge said, “The China (Shanghai) Free
Trade Zone is an important milestone in China’s efforts to build an international financial centre and to reform and reinvigorate its economy for longer term economic viability. As a leading bank in Asia, DBS is committed to leveraging our strong Asian connectivity and insights from Singapore and Hong Kong to fully support the development of the Shanghai Free Trade Zone.”

“We will leverage the new outlet to forge strong connections between the FTZ and Asian markets, helping clients to capture new growth opportunities.”

BANK SELL-OFFS AND SPIN-OFFS – WHO’S THINKING ABOUT THE CUSTOMERS’ INTERESTS?

ENDING THE TRADE OFF BETWEEN PROTECTION AND CONVENIENCE IN ONLINE BANKING