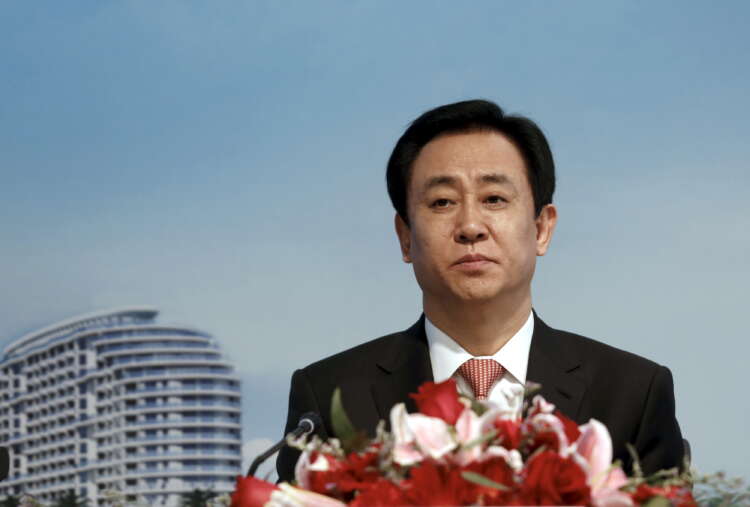 Hui Ka Yan said the company was striving to ensure quality delivery of properties and stressed the importance to resume construction on developments where building had been halted.

His comments come as Evergrande, which was founded in 1996, faces mounting pressure to quell anger among homebuyers and retail investors who have sunk their money into the group’s properties or its wealth management products.

Evergrande shares, which have plunged around 85% this year, jumped as much as 32% in resumed trade on Thursday after a public holiday, marking their biggest single-day percentage rise since its listing in 2009.

The bounce was seen mainly as a reaction to Wednesday’s news that an Evergrande unit had resolved a coupon payment with creditors, although this was just one of the hurdles the company faces as it labours under a $305 billion mountain of debt.

The group’s electric vehicle and property services units climbed around 3% and 9%, respectively.

The chairman’s comments late on Wednesday were “clearly aimed at stabilising markets but there seems to be not much information for bond holders,” said a source familiar with the situation. “There’s no clear plan as yet but we expect the debt to be restructured at some point,” said the source, who declined to be identified as he was not authorised to speak to the media.

Global investors have been on tenterhooks as the deadline looms, worried that the company’s malaise could spread beyond the country’s property sector and pose systemic risks to China’s financial system.

Chinese Estates Holdings, the second-biggest shareholder of Evergrande, said on Thursday it had sold $32 million worth of its Evergrande stake and planned to exit the holding completely.

On Wednesday, global markets reacted with relief when the People’s Bank of China’s injected 90 billion yuan ($13.9 billion) into the banking system and an Evergrande unit said it had “resolved” a coupon payment on an onshore bond.

Evergrande, China’s biggest property developer, ran into trouble over the past few months as Beijing tightened regulations in its property sector to rein back too much debt and speculation. It has found itself struggling to meet its debt obligations and investors worry that the rot could spread to creditors including banks in China and abroad. Some analysts say it could take weeks for investors to have any clarity about how the situation will resolve.

“The company could restructure its debts but continue in operation, or it could liquidate,” wrote Paul Christopher, head of global market strategy at Wells Fargo Investment Institute. In either case, investors in the company’s financial instruments likely would suffer some losses, he wrote.

“In the event of a liquidation, however, Chinese and global investors could decide that the contagion could spread beyond China,” he added.

A group of Evergrande bondholders recently selected investment bank Moelis & Co and law firm Kirkland & Ellis as advisers on a potential restructuring of a tranche of bonds, two sources close to the matter previously said.

The advice focuses on around $20 billion in outstanding offshore bonds in the event of non-payment, one of the sources said at the time.

Analysts have been downplaying the risk that a collapse threatens a “Lehman moment”, or liquidity crunch, which freezes the financial system and spreads globally.

U.S. Federal Reserve Chair Jerome Powell said on Wednesday that Evergrande’s problems seem particular to China and that he did not see a parallel with the U.S. corporate sector.

“In terms of the implications for us, there’s not a lot of direct United States exposure. The big Chinese banks are not tremendously exposed, but you would worry it would affect global financial conditions through global confidence channels and that kind of thing,” Powell told reporters after the Fed’s policy meeting.