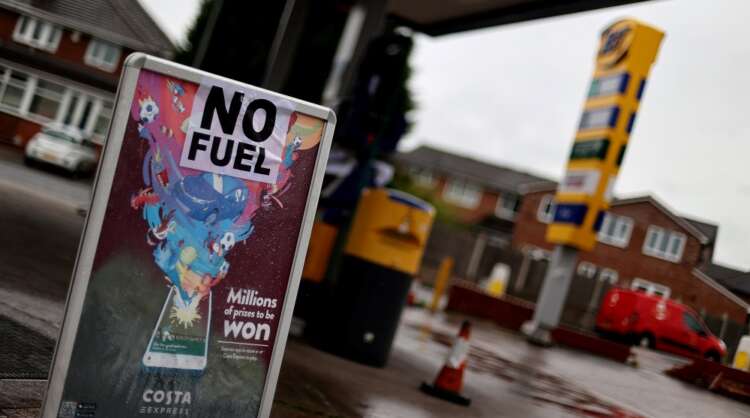 LONDON (Reuters) -Britain’s transport minister pleaded with motorists on Tuesday to refrain from filling up old water bottles with fuel at gas stations after panic buying left pumps dry across major cities and prompted the government to put the army on standby.

British drivers hunted for hours or sat snarled in queues to fill their tanks; dozens of forecourts were closed with signs saying they had no petrol or diesel, Reuters reporters said.

A post-Brexit shortage of truck drivers, exacerbated by a halt to truck-driving-licence testing during COVID lockdowns and people leaving the haulage industry, has sown chaos through supply chains, raising the spectre of shortages and price rises in the run up to Christmas.

Britain put a limited number of military tanker drivers on a state of readiness to be deployed to deliver fuel if necessary.

Transport Secretary Grant Shapps said there were some hints the situation was easing as reserves at some gas stations had been replenished.

“We’re starting to see very tentative signs of stabilisation which won’t yet be reflected in the queues,” he told reporters.

“The sooner we all return to our normal buying habits, the quicker this gets resolved – and I do appeal to the public to do that. In particular, no more water bottles at petrol stations: its dangerous and not helpful.”

Fights broke out at some English petrol stations as drivers jostled for fuel and pictures on social media showed some people filling up old water bottles with fuel.

There have also been growing calls for medics, healthcare staff and other essential workers to be given priority to fill their cars to keep hospitals and social care services running.

An air of chaos has gripped the world’s fifth largest economy in recent weeks as the shortage of truckers strained supply chains and a spike in European wholesale natural gas prices tipped energy companies into bankruptcy.

Retailers, truck drivers and logistics companies have warned that prices for everything from energy to Christmas gifts will have to rise.

“I can’t believe it – it’s crazy,” said David Scade, a 33-year-old delivery driver who drove for hours searching for fuel in London.

“They keep saying there is no shortage but I suppose everyone is panicking now,” said Scade who was filling up at a Shell gas station in London.

The Petrol Retailers Association (PRA), which represents independent fuel retailers who account for 65% of all the 8,380 UK forecourts, said many sites had run dry, but the situation did appear to be slowly improving.

“There is still a bit of panic buying, there’s still queuing, but we are hopeful that we are seeing the first signs of a move towards equilibrium,” PRA chairman Brian Madderson told Sky News.

“It’s the big urban centres on the mainland in England which seem to have this problem of higher than average demand.”

The government on Sunday announced a plan to issue temporary visas for 5,000 foreign truck drivers. But some Polish hauliers said that offer was laughable and that few would be likely to take it up.

Hauliers, petrol stations and retailers say there are no quick fixes as the shortfall of truck drivers – estimated at about 100,000 – was so acute, and because transporting fuel demands additional training and licensing.

Ministers want businesses relying on truck drivers to pay more and offer better conditions, rather than count on cheap foreign labour. But, hauliers and other businesses say that can only be a long-term fix, while in the meantime it will mean prices increasing and the risk of a prolonged rise in inflation.

The British Retail Consortium (BRC) urged the government to broaden the size and scope of the visa scheme to attract the truckers needed to keep Christmas supplies on track.

“It will take many months before there are enough new British drivers to cover the shortfall,” said Andrew Opie, director of food and sustainability at the BRC.