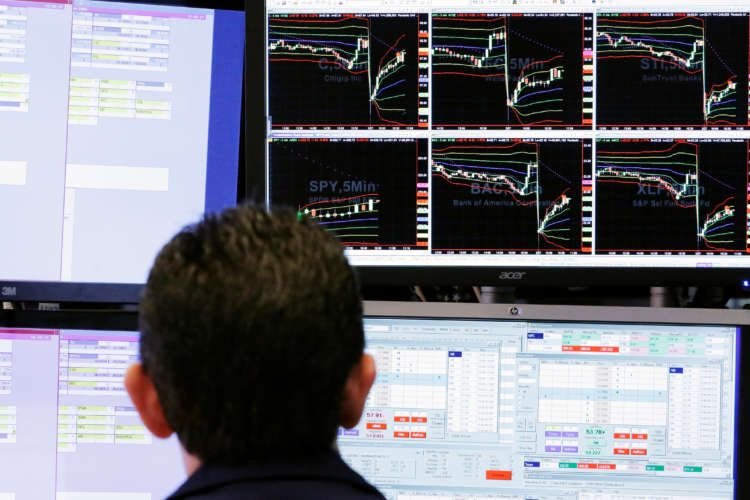 NEW YORK (Reuters) -The recent pace of the rise in yields in the U.S. Treasury market has been unsettling, according to several major bond fund managers who worry the market could be viewed as disorderly if the pace of rises continues.

Managers also cited some issues with liquidity as yields have moved upwards, with the 10-year Treasury yield up 80 basis points since January. It reached a 14-month high of 1.754% this week, fueled by the Federal Reserve’s pledge to keep monetary policy loose, boosting economic growth and inflation.

Some analysts have compared the rise in yields to the 2013 “taper tantrum”, when 10-year yields jumped 136 basis points to 3.06%, according to Rabobank.

“This isn’t a market for bond math and market geeks,” said Gregory Peters, head of multi-sector and strategy for PGIM Fixed Income. “It’s not so much the rise in interest rates as it is the volatility and swiftness that’s unsettling. There is real momentum around it.”

Peters, who initially estimated the 10-year yield would drift in range of 1.25%-1.5% this year, said there was a “momentum to take rates higher here from a markets standpoint in a way that I underappreciated.”

Yields have soared past market expectations. A Reuters poll in December of over 60 strategists showed they expected the U.S. benchmark yield to edge up to 1.2% in the following 12 months.

“(The 10-year yield) could go as high as 2% and that’s really not more than a few trading days away at this point,” said Gregory Whiteley, a portfolio manager at DoubleLine.

Fed Chair Jerome Powell has thus far brushed off concerns that the recent surge in U.S. Treasury yields might spell trouble for the central bank’s extended easy monetary policy. But a rapid move higher, which can raise borrowing costs for companies and consumers, could eventually compel them to reconsider, said Whiteley.

“A rate rise that continues at the pace we’ve seen in the last six weeks will at some point come to be seen as a disorderly market that needs a response from the Fed,” said Whiteley.

Bond managers attributed some of the force behind the move to speculators who are significantly short longer-dated Treasury futures, according to recent data from the U.S. Commodity Futures Trading Commission.[L1N2LG2CV]

“The momentum right now is in the hands of the shorts,” said Andrew Brenner, head of international fixed income at National Alliance, describing them as “bond vigilantes” – investors who sell debt holdings to pressure central banks to change monetary policy they view as inflationary.

Though the Treasury market is historically the deepest and most liquid in the world, demand for Treasuries has been rocky as the supply of new debt has risen to pay for COVID-19 stimulus measures.

The bid-ask spread on the 10-year Treasury note, a measure of liquidity which shows the difference between offered and accepted bids, on Thursday reached its widest since Feb. 26, the day after a weak debt auction which sent the 10-year yield 20 basis points higher.

The Treasury market faced a liquidity crunch in March 2020 as the coronavirus was taking hold in the United States, until the Fed intervened to backstop the market.

“All the structural factors that contributed to poor liquidity that resulted in pricing dislocations in March, those are still in play. And that is contributing to the market overshoot,” said Tiffany Wilding, North American economist at bond giant PIMCO.