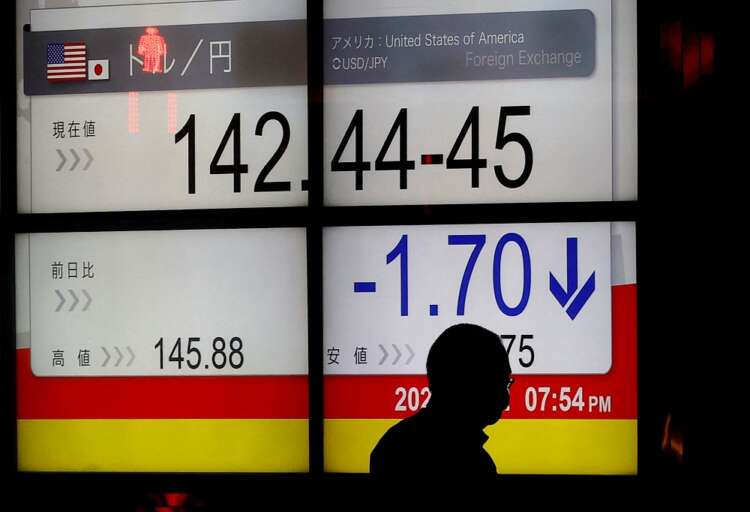 By Amanda Cooper and Tommy Wilkes

UK assets were already weaker but extended their fall after Britain’s new finance minister unveiled an historic tax-cutting agenda that will see government borrowing soar. UK bond yields were set for their biggest daily rise in decades, and money markets were pricing in Bank of England interest rates of as much as 5% by May next year. Sterling lost 2%.

The mood on markets has been sour all week, with major central banks delivering another 350 basis points of rate hikes to fight inflation, Japan intervening to prop up the yen and grim purchasing managers index data on Friday pointing to a deepening slowdown in major economies.

Rates were hiked in the United States, Britain, Sweden, Switzerland and Norway – among other places – but it was the Federal Reserve’s signal that it expects high U.S. rates to last through 2023 that sparked the latest sell-off.

MSCI’s world stocks index fell to its lowest since mid-2020 on Friday, having lost about 12% in the month or so since Fed Chair Jerome Powell made clear that bringing down inflation would hurt.

The euro fell for a fourth straight day after data showed the downturn in the German economy has worsened in September, as consumers and businesses face an unprecedented energy crunch and spiralling inflation.

European stocks were a sea of red for a second day, under pressure from losses in everything from bank to natural resources and technology shares. [.EU]

The pan-regional STOXX 600 was down about 2.2%, while Frankfurt’s DAX lost 1.94%, ranking it as one of Europe’s worst-performing indices.

“Pretty much anything besides inflation data and central bank policy decisions is just noise at the moment, with the market firmly, and almost solely, focused on how high rates will rise across developed markets, and how long they will remain at those peaks,” Caxton FX chief strategist Michael Brown said.

London’s FTSE lost 1.9%, against a backdrop of the pound tumbling 2% to another 37-year low and as weak as $1.1022 at one point. The cost of insuring UK debt against default also jumped. 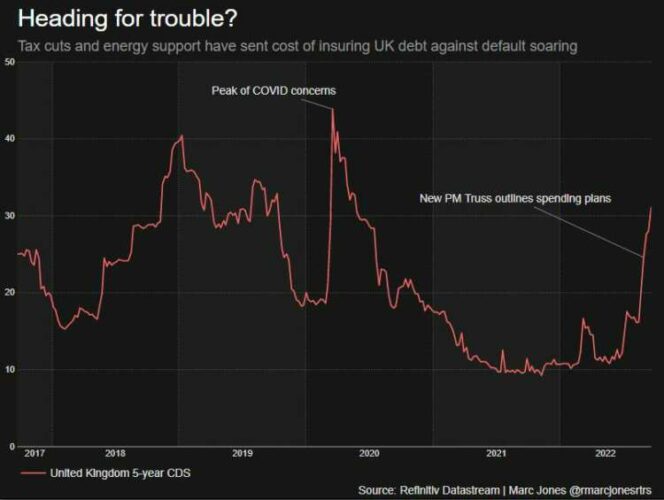 “Typically looser fiscal and tighter monetary policy is a positive mix for a currency – if it can be confidently funded,” said Chris Turner, global head of markets at ING:

“Here is the rub – investors have doubts about the UK’s ability to fund this package, hence the gilt under-performance.”

With U.S. rates set to rise faster and stay high for longer, the dollar hit its highest in two decades and extended its double-digit gains for the year against several currencies. The Swedish crown, sensitive to the global investor mood, has this week repeatedly dropped against the dollar to its weakest since at least the early 1970s, Refinitiv data showed. 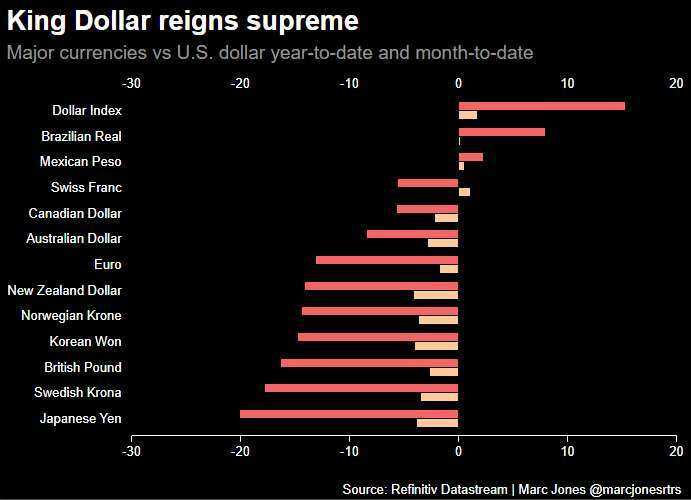 The 10-year yield rose 5 basis points to 3.776%, another 11-1/2 year high and on course for its eighth consecutive weekly increase.

Euro zone bond yields also rose sharply, with the Italian 10-year hitting 4.294%, its highest since late 2013, ahead of Italian elections on Sunday.

The Japanese yen fell sharply on Thursday until Japanese authorities stepped in to buy the currency for the first time since 1998 and arrest its long slide.

On Friday the yen gave up some of its gains, with the dollar up 0.4% at 142.97 yen per dollar. Few believe the yen rally will hold given how dovish the Bank of Japan remains.

Gold, which pays no interest, has come under pressure, particularly over the course of this quarter, as yields have risen. It was last down 1.55% on the day around $1,644 an ounce, at its weakest in two years.