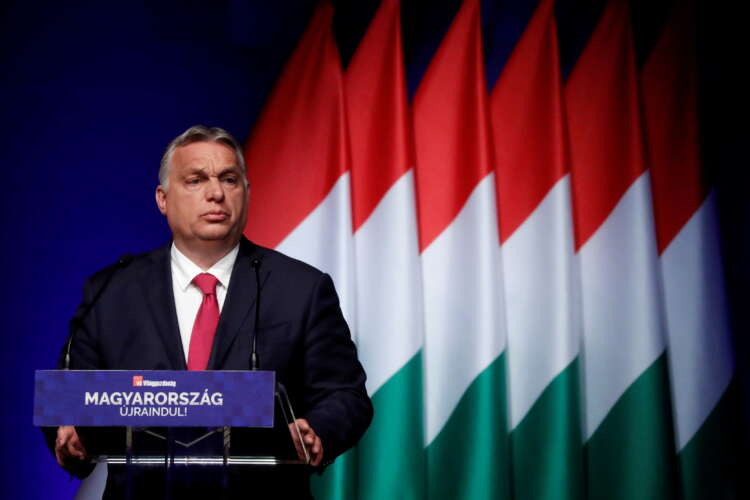 By Krisztina Than and Gergely Szakacs

BUDAPEST (Reuters) – Hungary’s fast economic rebound from the pandemic and rising inflation opened a rare rift between the government and central bank on Wednesday, with the bank’s governor flagging imminent rate hikes and calling for a lower budget deficit.

Nationalist Prime Minister Viktor Orban, who faces a tough election in April 2022, however, said Hungary cannot cut its budget deficit to 3% of economic output next year in one step from 7.5% as it would deal too big a shock to the economy.

Orban, who has been campaigning on the back of a mass COVID-19 vaccination campaign which has so far innoculated 54% of the population, is betting on a fast economic rebound to help his re-election bid next year.

He affirmed a 5.9% deficit target for next year, and rejected central bank Governor Gyorgy Matolcsy’s call for it to narrow to 3% of GDP. Orban also trailed a big personal income tax refund to families with children worth over 550 billion forints ($1.9 billion) early next year.

The premier strongly hinted he would prefer a cautious approach to monetary tightening.

“We have heard that a cautious — at least I hope cautious and measured — rate hike cycle will start,” Orban told a conference minutes after Matolcsy said rates would be hiked to tackle inflation risks.

Orban and his Fidesz party face their first competitive elections next year after three successive landslides since 2010. Opposition parties have united against Fidesz for the first time and caught up with them in opinion polls.

Orban said the government would support small businesses with cheap loans as the central bank winds down its own lending scheme.

“We must offset this impact on small and medium-sized enterprises,” Orban said, adding the state budget will finance loans with interest rates not higher than 0.5% for small businesses.

The central bank earlier on Wednesday pledged to launch a decisive tightening cycle this month to tackle inflation risks, saying a sustained rise in prices could threaten the economy’s rapid recovery.

“It is the obligation of the central bank…to wrestle down inflation,” Matolcsy told an economic conference. Matolcsy said the bank would also wind down its loans programme for companies but would continue its bond-buying programme for the time being.

Hungary is on track to reach economic output levels seen before the coronavirus pandemic by the third quarter of 2021, Matolcsy said.

His deputy, Barnabas Virag said the first “effective” step on interest rates will come at the June 22 meeting as the central bank wants to act very firmly against inflation risks.

The bank has a 3% inflation target with a one percentage point tolerance range on either side. Hungarian headline inflation stayed at an annual 5.1% in May after a similar reading in April, data showed earlier on Wednesday.

(Reporting by Krisztina Than; Editing by Toby Chopra)