Has the Fed changed?
Advertisement

If we were to call last week as the release of the easing signals for global central banks, investors have clearly shifted their focus back to the good old topic again this week: “Fed’s decision on the QE”. The U.S. Dollar index has soared from the nine-month high to almost a three-year high, backed up by many hawkish comments from Fed presidents and fundamental releases.

We know that the Fed has abandoned the Calendar approach, focusing solely on the labour market performance and the inflation levels. Under normal economic conditions, the central bank would change the interest rate by “open-market operations”, i.e. buying and selling securities, and changing reserve rations to alter money supplies. Lower interest rates encourage spending and investments. In times of economic distress, traditional open market operations do not work as the interest rate may already be near zero. Then comes QE, where the central bank boosts liquidity by buying securities in the market. The Fed has been the pioneer of QE in recent years. But from QE1 to QE infinity, has the Fed’s policies been effective? Is it the time to end it now?

Essentially, how has the U.S. performed so far?
In fact, the yearly moving average of the Non-farm Payroll during the several QEs is declining. Until the sudden improvement in May and June 2012 that made the turnaround matching the pre-crisis levels. Non-farm Payroll added 165K surprisingly in April last month; even March’s dismal 88K job increase was revised up to 138K. On one part, labour market seems improved. However, though unemployment has dropped down from the crisis peak of 10%, it remains elevated at 7.50%, away from its 6.5% target. Inflation level still sits below the Fed’s target of 2%. Manufacturing and Industrial production in Philadelphia and Richmond both declined in April. 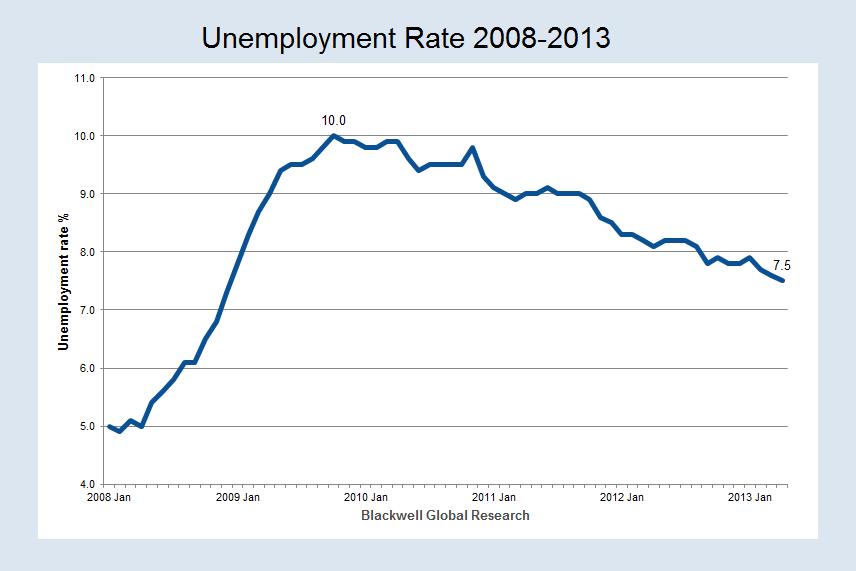 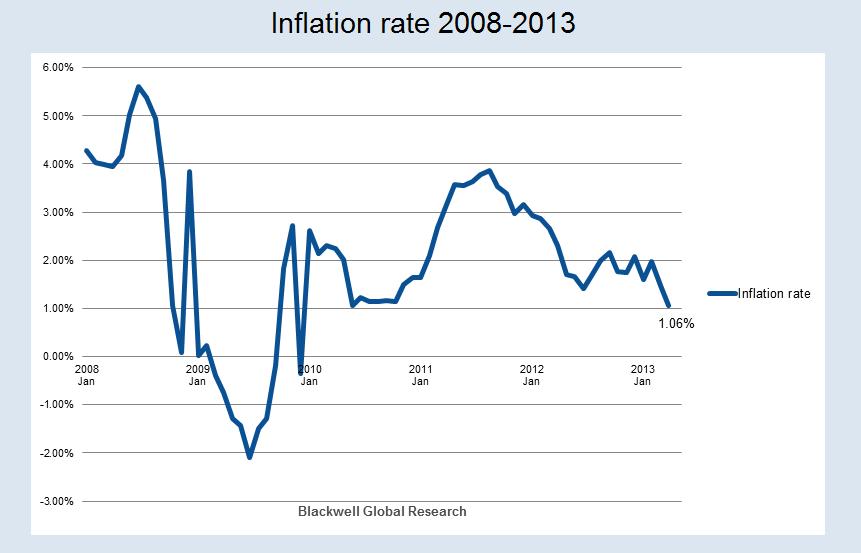 Given the recent talks from the Fed, USD counterparts have been further pressured. Commodities have given back previous gains while risk currencies like AUD and NZD also lost close to 3% this week.

Has the Fed really changed its mind?
Though Bernanke has been hiding his intention on the course of the QE programme, the internal debates between several Fed presidents have been enough to rock the market sentiment.

Hawks:
Richard Fisher from Dallas, the most vocal hawk, has warned that the massive QE will pose a spike in the inflation level and he is in favour of dialling back the current monthly $85bn purchases. Richmond Fed Lacker insisted that the labour market performance is out of the central bank’s control, while Plosser from Philidehiphia also called a cut back in the pace of QE. The market was really turned on its head after a former dove, San Francisco Fed President John Williams suggested that QE should be slowed by summer and completed by the end of this year. For the market, the change in attitudes just helped fuel further expectations of ending QE.

None of them have voting rights this year, but it does not detriment their weighting on the market. Some of them will vote next year, and we all know a change in monetary policy is not something that can happen overnight. The tricky part of it is WHEN will the Fed act.

Doves:
On the other hand, Chicago Fed President Charles Evans said early this week that the Fed could keep up its current level of bond-buying stimulus, but may end it in autumn if the economic condition is recovered fully; by that, he expects a 3% to 4% GDP growth by 2014.

St. Louis Federal Reserve President James Bullard also dented expectations that the Fed might not taper its bond purchases any time soon as he reiterated that the Fed should maintain its “effective” QE program. Ironically, these people have voting rights this year.

So essentially, there is no clear support for any change in policy so far within the Fed.

Bernanke testimony
Despite all of the above debates, the theme is clear: the market has priced in the possibility of a policy change. Analysts have been long expecting a more cautious speech from the Chief before Bernanke testified to Congress on Wednesday.

Markets have been long debated this: should he hint any possibility of altering the current bond-buying pace or optimism about the U.S. economy, the greenback rally will be boosted. On the other hand, should he sound dovish, the rally we’ve seen recently is easily killed. As more dovish and cautious member, also given the recent uneven performance of the U.S. economy, it is very unlikely for him to openly discuss roads of exiting the QE in the near term. HOWEVER, surprisingly, that is what he did; though he did sound more cautious at the start, causing the rally to halt.

The message is clear, the Fed is serious about tapering QE. The USD extended its gains as Bernanke basically shows no objection to the rally. USDJPY also rose to a fresh 4.5 year high.

FOMC
On the other hand, the minutes from Apr 30 – May 1 FOMC Meeting, released hours after Bernanke’s testimony, showed a divided Fed again. Due to the dismal un-revised Non-farm Payroll of 88K in March, Doves are insisting to keep the current programme unchanged; while the Hawks were already calling for tapering QE in June.

The next four FOMC meetings are scheduled for June 19, September 18, December 18, and March 19 next year. The easy part to say is that a change will not happen in the June meeting. Of course, it depends on the actual data.

All in all, everyone is participating in the so-called “currency war”, and now suddenly Fed presidents are screaming that they want to quit, or at least pretending to be quitting. From the above analysis, in the long run, there is potential for the USD to regain dominance. Chinese demand has slowed; Europe is in a long dreaded recession while commodities are also on the decline.