GOOD NEWS FOR EUROPE - BUT WHAT HAVE FALLING OIL PRICES MEANT FOR GULF FINANCES? 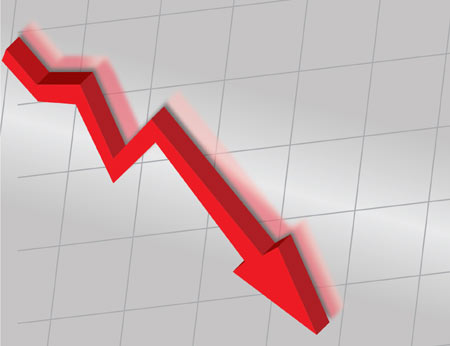 After four consecutive years of stable oil prices at around $105 per barrel, prices declined sharply in the second half of 2014 and continued to fall during 2015. Several reasons contributed to this fall, including shale oil extraction, efficiency in hydrocarbons machinery and a switch in the OPEC objective from targeting oil price bands to maintaining market share. Most importantly, concerns about geopolitical factors disrupting the supply of oil from main exporters in the Middle East contributed to the offal in oil prices.

The effects of reduced energy input and transportation costs for major European industries have positively affected GDP in varying degree. The EU Economic forecasts published by the European Commission at the beginning of 2015 were for a recovery, with growth forecast of 1.7% (2015) and an expected 2.1% (2016).

However, the other side of the story is that the sharp fall of oil prices negatively affects fiscal balances of oil-exporting countries, which may create huge budgetary deficits for GCC countries. It has become increasingly unaffordable for GCC governments to provide for the highly expensive national youth employment given the increased recruitment of foreign labour. This is causing massive cuts on wages to make up for the constrained labour expenditure.

To better gauge the effect of the oil price fall on oil-exporting countries in the GCC, one needs to understand that huge losses are realized in varying degrees depending on whether or not the economies are highly dependent on oil exports. Oil export losses in the GCC region are expected to reach about $300 billion or 21% of GDP in 2015. The vulnerability of oil-exporting countries to the falling oil prices is measured by ‘fiscal break-even prices’ – the oil prices at which the governments of oil-exporting countries balance their budgets. For GCC countries, breakeven prices range from $54 per barrel for Kuwait to $106 per barrel for KSA. Breakeven prices for 2015 are presented in the figure 1 below – based on national and IMF figures. Figure 2 shows that the fiscal break-even oil prices for each of the GCC countries have increased significantly over the years of 2008-2013. 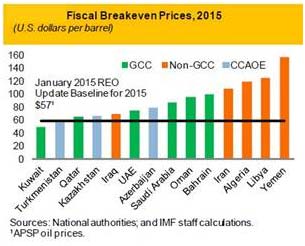 There are obvious differences across GCC countries in regard to fiscal expenditure and the breakeven points. Two contrasting cases are the UAE and KSA, where the former adopted a diversification strategy for the past decade, which promised a balanced budget of $ 13.4 billion for 2015. This would represent an annual increase of 6.5 %. The UAE budget has no deficit or introduction of any new taxes. Surprisingly, it conveys an obvious increased income and public spending, suggesting that the economic system of the UAE is unaffected to a great extent by the declining oil prices. The UAE has succeeded to achieve a less dependent strategy on oil and gas as sources of revenue.  The share of the government’s total revenue from oil is expected to fall to 5% in 2014. The case of KSA is radically different. Public spending reaches $229 billion, representing a marginal increase of 0.6% from 2014, but revenue has declined by nearly 30%, reaching $191 billion. This partially explains the higher break-even price of KSA vis-à-vis that of the UAE.

On one hand, the sharp decline in oil prices have contributed to substantial volatility in equity markets as investors have started to reassess prospective growth rates for oil-exporting markets. Moreover, the price decline has induced massive changes in oil subsidies and structural changes in taxation on the use of energy to counteract negative implications. GCC countries are putting limits on the huge wages and subsidy bills. The case of Bahrain is a clear manifestation of these changes as oil constitutes 87% of total revenue of the country creating a challenge to diversify economic activities. Due to the escalating budget deficit, Bahrain will start massive subsidy cuts on goods and services provided to expats, who represent more than 50% of residents. On the other hand, Bahraini citizens will receive cash payments from the state to offset expected inflation. However, the price tag is expected to double on red meat for all residents as the government plans to remove the subsidy by August. Kuwait is also cutting subsidies on oil products to restrain spending on the opulent subsidies eating up almost 25% of government spending. However, KSA is still studying the potential of cutting subsidies on energy sources.

Budgetary constraints in oil-exporting countries are characterized as ‘inevitable’. However, the vulnerability inherent in oil-concentrated export strategies makes it crucial to diversify the economy towards other sources of revenue. Most GCC countries have significant fiscal buffers allowing them to avoid sudden cuts in spending while capitalizing on real-estate projects and services other than oil based industries.  For less resilient economies, such as Bahrain and Oman, a reduction in fiscal expenditures is expected but over extended periods rather than immediately. The good news is that average buffers in GCC countries can finance substantial deficits for almost four years. With the most diversified economy among all GCC countries, the UAE is estimated to grow its non-oil-based investments and thus may not need to make structural changes in its budgetary policies as the oil price drop has only marginal effects on growth rates. Likewise, KSA and Qatar are not in a very bad financial position to cope with the falling oil prices.

With the likely impact of large reductions in fiscal expenditures on regional equity markets, policy makers must take into account investor confidence in equity markets. Another option lies in debt issuance, especially Islamic financial instruments that are now getting popular in Europe, Asia, and the United States. Debt issuance doesn’t erode economic buffers neither do they burden budgetary expenditures. In spite of declining oil prices, credit markets are solid, making debt issuance a promising path to follow.

GCC and other emerging economies are still expected to grow but at a slower pace. The fiscal budgetary cuts are painful and cannot be avoided. However, other solutions head towards the privatization of non-essential public services and issuance of debt instruments. Potential sectors that are promisingly growing are banking, telecom, transportation, and aviation. The use of Islamic special purpose vehicles (SPV), to issue debt, remains an interesting and plausible route provide other sources of revenue to finance public spending.

Estimated to last only for the short run, the sharp decline in oil prices can be offset if the GCC countries diversify their revenue sources and capitalize on diversified investment portfolio to finance their public spending. Experts forecast an increase in oil prices within the next few years. The futures market suggests that oil prices will recover only slowly to hit $70 by 2019. With regards to European economies, the falling oil prices should provide a boost to GDP growth in the short run. However, policy makers should not fall for the quick temporary increase and dodge medium-term and long-term economic reforms.