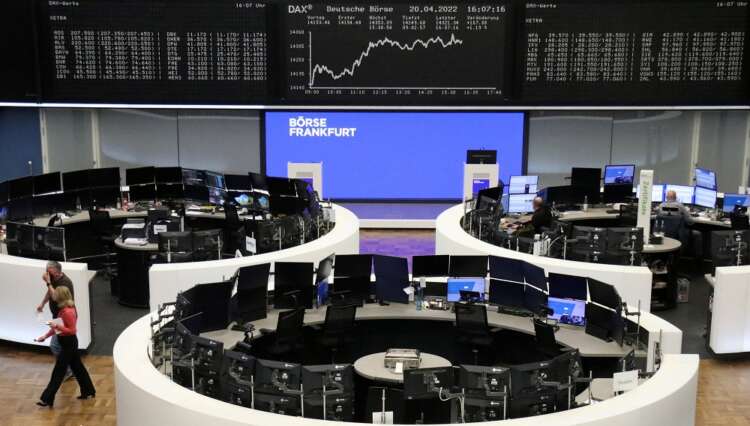 The pan-European STOXX 600 firmed 0.5%, rising for a second straight day, with construction and travel shares in the lead.

Nestle gained 1.3% after the food group confirmed its targets for the year as price increases helped quarterly sales rise more than expected, while engineering firm ABB climbed 4.7% on a sharp rise in orders during the first quarter.

“Stocks are higher and confidence in European markets has broadly been moving up … despite higher yields, the war in Ukraine, and speculation about higher interest rates,” said David Madden, market analyst at Equiti Capital.

The STOXX 600 is set to end the week about 0.6% higher, on track to erase last week’s losses of 0.3%, with banks gaining the most on the week following expectations of a looming interest rate hike from the European Central Bank (ECB).

ECB vice president Luis de Guindos said the central bank should end its asset purchase programme in July and could raise rates that same month, in September or later, according to an interview.

Money markets are now pricing in a 20 basis point rise by July and more than 70 basis points of cumulative increases by the end of 2022. [FRX/] [IRPR]

France’s CAC 40 led gains in the region, rising 1.6%. President Emmanuel Macron cleared a major hurdle ahead of Sunday’s runoff vote with a combative performance in a TV debate against Marine Le Pen that convinced most viewers, a poll said.

In other earnings updates, Akzo Nobel advanced 5.5% on strong earnings helped by higher pricing, while Italy’s Saipem leaped 10.0% after its adjusted core earnings rose 65% in the first quarter to beat expectations.

(Reporting by Anisha Sircar in Bengaluru; Editing by Shounak Dasgupta)